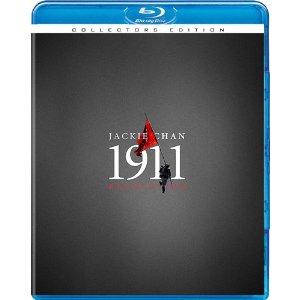 
Factual as 1911 Revolution is, it isn’t a film about the reasons behind the Chinese Revolution of 1911. We aren’t given examples for the dedication the people feel for this cause, and in some ways it is not necessary. This is a film about the revolution, and it drops us right into the fray. From the very beginning of the film there is an urgency to the revolution, with starving citizens turning into a warring faction of Chinese society. The Qing Dynasty is led by a seven-year-old emperor, and the people begin to openly rebel against the tyranny of the powerful army sent out to crush those in opposition.

1911 Revolution is a film which darts along in the plot, skipping from one significant event to the next. This requires an ensemble of characters, and we don’t get to know very much about any individual. The one exception is Huang Xin (Jackie Chan), one of the men considered for the role of ’s first president once the revolution had worked. After spending time in studying the art of modern warfare, Huang returns to his home country to find it ravaged by the revolution, though he takes no pause in considering which side to join.

There is a reason that the character development is kept minimal, and it is due to the strength of another aspect of the film. From the production design to the costumes, and certainly within the script, 1911 Revolution is historically accurate above all else. This means that there are not many scenes in which emotions are guessed into the dialogue, but what we do see was likely to have actually happened.

The Blu-ray includes deleted scenes, a behind-the-scenes featurette, and interviews, which include the press conference. The Collector’s Edition Blu-ray also includes a DVD, but the real highlight is the high definition presentation of the film. All of the work in the sets and costume design can be seen in detail, and the power of the battlefields can also be properly experienced with 5.1 DTS-HD Master audio.

obviously like your web-site but you need to
take a look at the spelling on several of your posts.

A number of them are rife with spelling problems and I find it very bothersome to tell the truth
nevertheless I will surely come again again.

I have read so many articles or reviews on the topic of the blogger lovers however this paragraph
is actually a pleasant piece of writing, keep it up.

We are a group of volunteers and starting a new scheme
in our community. Your website offered us with valuable info to
work on. You've done an impressive job and our whole community will be grateful to you.

Yeah, no doubt I could spend more time proof reading posts. Trying to get better at it, but there is simply too little time in the day and I typically choose to spend it watching and writing about more movies rather than reading my own work. Oops. Thanks for the comments, compliments and criticism. All is greatly appreciated!

Hello to every body, it's my first visit of this blog; this webpage
includes remarkable and genuinely fine information in favor of readers.