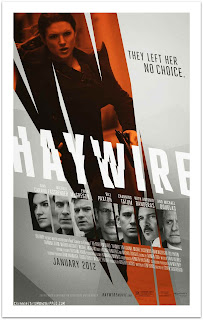 Soderbergh provides plenty of hand-to-hand action, a female MMA fighter for a heroine, and a strong cast of leading men for her to beat senseless in this compelling spy thriller.


Haywire reminds me of the kind of films that Quentin Tarantino started out making. It is a simple story which is made more intricate in the way it is told, and director Steven Soderbergh has his own way. The way the story unfolds may feel like Tarantino, even opening with a diner scene and featuring a strong and vengeful leading lady, but the dialogue is very akin to a typical Soderbergh film. The dialogue is minimalistic and we are dropped right into the story, so that much of the simple story is only understood after half of the film and many flashbacks.

There are many familiar elements to this small spy thriller, but the one that stands out as something new is leading lady Gina Carano. Aside from a few small roles in some fighting films, Carano is best known as a Mixed Martial Arts fighter, as well as one of the American Gladiators. Carano's physical abilities are showcased as she performs her own stunts and fight choreography. Haywire has Carano playing Mallory, a female spy playing in a man's world. In this world many of the men who are supposed to be on her side take sucker punches in order to try and take her out, but this is also the kind of film which predominately features leading men (Channing Tatum, Ewan McGregor, Michael Fassbender) being beaten senseless by this new action star. She's Jason Bourne, James Bond, Tony Jaa, and a little bit of Rachel Weisz all wrapped into one package.
﻿
﻿

They are calling this film Soderbergh's B-film, and in some ways I can understand what they mean. This is the kind of film which would have been the B-film in a traditional movie-house line-up. It would have been in the same category as the gangster and film noir pictures, lower budget and lower expectations than the main feature. These weren't the award-winning films, and Haywire won't get Soderbergh the same attention that his other films have. This is a 93-minute espionage action film with a lot more hand-to-hand fights than dialogue, but it is still hard for me to consider this a B-film. On top of star names like Fassbender, McGregor and Tatum in the leading men roles, Haywire also features Michael Douglas, Antonio Banderas and Bill Paxton in smaller roles. These are small roles but they add to what is essentially a film about presentation.
﻿﻿﻿﻿﻿﻿
﻿
﻿

Haywire isn't trying to reinvent the wheel. Soderbergh seems to make two types of films; those that are big budget and made for entertainment over critical praise (such as the Ocean's 11 franchise), and then there are his independent films which are often more groundbreaking than blockbuster (such as his debut film, Sex, Lies and Videotape or Che). In other films Soderbergh has experimented with uniquely fitting casting, such as porn star Sasha Grey in The Girlfriend Experience, a film about a call girl. Haywire seems to blend all of these tendencies of Soderbergh's into one film. It is a compelling action film with a premise, a leading lady whose best-known profession has also made her distinctly suitable for the role, and despite a plethora of name actors this still feels like a smaller film for the eclectic filmmaker. This may be The Bourne Identity meets Kill Bill, but it is also stamped with a style which is clearly Soderbergh. Simply put, Haywire is a solid film which elevates the genre as well as our expectations for the first quarter films of 2012.