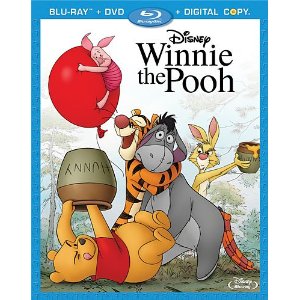 Although it hardly counts as a feature film, running at a mere 63 minutes, I can’t imagine Winnie the Pooh being much longer. It is a perfect length, leaving the audience wanting more rather than tiring of the lighthearted hijinks of the beloved honey-loving stuffed bear. Everything from the animation style to the stories taken directly from the classic A.A. Milne books is simplistic, making this a delightfully tame animation film for the whole family.
It is as if the pages from Milne’s books were transferred directly to film, a world which the hand-drawn animated stuffed animals are able to freely explore. The writing from their story, which is narrated by John Cleese, appears on the screen as it would on the page, and the characters interact freely with the text. It exists in their world like the Hundred Acre Woods do. On a separate note, all of the voice actors for the animated characters are somehow similar to the way I remember them, though Tigger is a bit different.
The classic storylines taken for this wonderful albeit brief film adaptation include the search for Eeyore missing tail. Then it is Christopher Robin who is missing, and the whole gang sets out on a mission to capture the Backson monster, who Owl believes kidnapped Christopher. Segments are broken up even further with song, both by the characters and additional music with vocals by Zooey Deschanel.
The DVD/Blu-ray combo pack comes with a disc for each, along with special features. The DVD includes three deleted scenes with an optional director’s introduction. There are also two short cartoons, including a mini episode of Winnie the Pooh. The Blu-ray includes these as well as an additional two deleted scenes and a featurette. The Blu-ray also has an exclusive sing-along option.

Email ThisBlogThis!Share to TwitterShare to FacebookShare to Pinterest
tags Winnie the Pooh