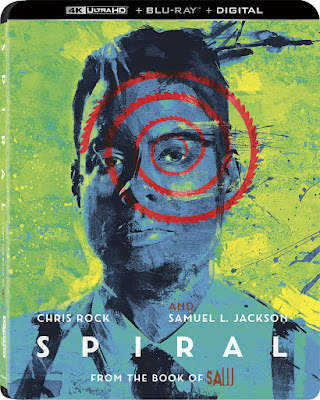 Spiral (or Spiral: From the Book of Saw, if you need the full title as indicator of what you are getting into) revives a franchise that distinctly belongs to a sub-genre of horror that has fallen out of favor in recent years. Torture porn had its heyday after 9/11, and the Saw franchise was at the forefront with a sequel nearly every year soon after the first film was a success. We were promised the end with Saw: The Final Chapter in 2010, but that turned out to be untrue when it was revived in 2017 with Jigsaw. Spiral takes the series in a new direction, indicated by a new title and higher caliber cast members than typically found. Unfortunately, beneath the fancy new marketing is just another Saw film, derivative and predictable even with a bit of social relevance added to the formula.

There isn’t necessarily anything wrong with a genre film having a derivative plot. In some ways, we go to see genre movies because of their familiarity, and the ability to give us what we came for. Audiences don’t go to romantic comedies expecting to see the couple do anything other than fall in love by the end of the movie, and most watch martial arts movies with the understanding that there are storylines that get re-used time after time. This is because they work. Hydra leans heavily into a set-up which has been used countless times in action movies, especially ones with martial arts. But while there isn’t much new to the story, that simply makes the fighting elements of the film that much more important.