When people are at the top of their game, that is usually when they have the urge to expand their range. This is clear in all fields, explaining Michael Jordan’s decision to play baseball, any number of actors who have transitioned into the world of music, musicians transitioning into the world of acting, or Kanye West’s apparent plans to try his hand at politics. It also explains why comedic actors inevitably try dramatic work at one point or another. While Enter the Dragon is a martial arts film like many others that Donnie Yen has made, the addition of slapstick comedy makes it the type of film one might expect to see Jackie Chan starring in. And though Yen is capable of the added element, this doesn’t save the film from being a bit derivative and tonally uneven. 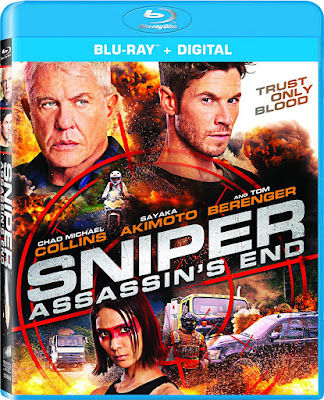 As the eighth film in the Sniper franchise is released on home video, it is becoming apparent that we will likely see this series stay in the family for as long as they can come up with clever titles and Tom Berenger is available for a brief appearance. And even when the original star is no longer available or willing, the series can continue with the next generation of Thomas Beckett in his son, Brandon (Chad Michael Collins). The cast is consistent from film to film, as is the unimaginative plotting.