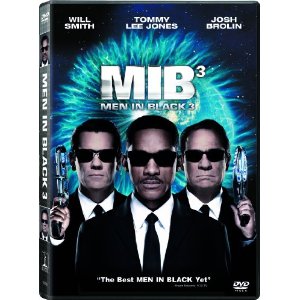 With gags and effects that are more 3D oriented for the extra theatrical dollars and a little more bromance than before, the Men in Black return for a third outing after many years off. Time travel gives the film a new setting, some new characters and a few new actors to play the younger counterpart of old characters. Most impressive is Josh Brolin as the younger version of Agent K (Tommy Lee Jones). Jones takes a smaller role in this third film, though this only allows for Will Smith to shine more. Few actors have been as consistent with a blockbuster as Smith, and playing Agent J in Men in Black 3 seems second-nature for him.

This time around the entire world is at stake when a time-traveling alien is able to alter the future by assassinating Agent K before he has the chance to protect the planet with a special device. When Agent J wakes up to a different existence, he must time travel in order to save his partner and set things right before the planet is destroyed. The destructive alien set to kill Agent K is a fierce new villain (played by Jemaine Clement) with pet monsters that emerge from his wrists.

This film franchise has always been about the humor and the absurdity of the aliens within the film. The third outing is no exception, with plenty new alien species and a slew of fast-talking wisecracks from Smith. Director Barry Sonnenfeld is known for making films that are harmlessly entertaining. This is one of those films; the cinematic equivalent to a fast-food meal. It has little substance and can hardly be recalled after completed, but there is no denying the enjoyment of its consumption.

The DVD includes a making-of feature called “Partners in Time,” as well as a gag reel and a music video. Thankfully Will Smith has thrown in the towel for creating the theme song as well, and this time it is Pitbull who provides the additional pop culture. More significant is the reprisal of Danny Elfman for the score.
No comments: 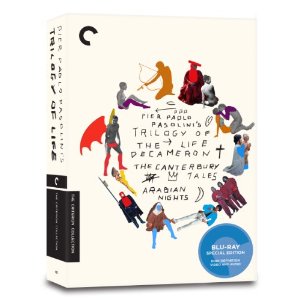 The three-disc Blu-ray release comes with a number of remarkable special features on the discs, not to mention a 64-page booklet with essays, photos and an excerpt from a press conference with Pasolini. All three films have also been digitally restored in high definition. The special features on the discs include new interviews, visual essays by film scholars Patrick Rumble and Tony Rayns and several documentaries about various aspects of the bold productions.
No comments: