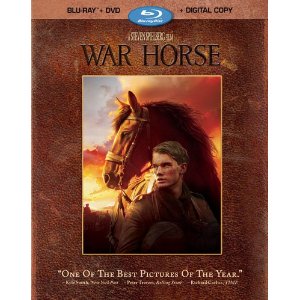 I was right there alongside the title horse, captivated from opening frame to the close of the film. It wasn’t until the lights came up in the theater that I had the distinct feeling that I had been manipulated by the best. Steven Spielberg knows how to speak to audiences; he is a master at drawing the chosen feelings from his audience members. The problem with this effective method in the case of War Horse is the point behind it. We can all understand the point of a difficult film like Schindler’s List or even Saving Private Ryan, just like we can understand the viewing enjoyment of E.T. or Jaws. But where does War Horse fit in? It has little to say about war beyond the abuse of animals, and there is little enjoyment to be found with so much abuse to the animals dominating the storyline.
Although there are human characters within the storyline, the only constant throughout the film is the silent protagonist. This horse is first bought by a farmer, despite being better suited for a more luxurious lifestyle as the horse of a rich man. The initial friendship between a young man and this horse sets the backdrop for the remainder of the film, during which the horse is put through dreadful scenario after another in the battles of World War I. The horse’s name is Joey initially, but he changes owners so often throughout the war that names become insignificant.
War Horse is based on the Tony award-winning Broadway play, fully realized in the cinematic mind of Spielberg. There are some magnificently sweeping moments of cinematography which make it difficult to imagine this story onstage. Then there is the overwhelmingly manipulative melodrama which appears inexplicably at every turn of the film’s storyline. This would be much easier to accept in theater, where a certain level of disbelief suspension is required to begin with.
No comments: 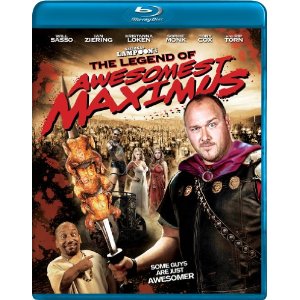 I laughed more during Immortals than I did watching the epic spoof, The Legend of Awesomest Maximus. What’s more, the films which are spoofed in the latest lazy entry from the National Lampoon gang are all old enough to no longer seem relevant. There are no Immortals jokes, but instead the most recent film to be poked fun of is 300, which much of the film instead focusing on and Gladiator for inspiration.
General Awesomest Maximus (Will Sasso) is destined to be great, so he has turned into a slacker in the of of (Rip Torn). The overall incompetence leads to a rivalry with King Erotic of when Prince Orlando steals the King’s wife, Ellen (Sophie Monk). The great warrior Testiclees (Ian Ziering) is sent after them to retrieve Ellen and glory, while General Awesomest Maximus must prepare for his destiny.
The Legend of Awesomest Maximus is directed by Jess Kanew, best known for Revenge of the Nerds. There have certainly been worse spoof films in the recent past, but just because this film is better than Epic Movie doesn’t make it anywhere near the quality I would be comfortable recommending. Then again, I can’t remember the last spoof which I found deserving of praise, so I suppose this could just be a genre I could do without. Too bad we have passed the days of Naked Gun and Airplane.
No comments: 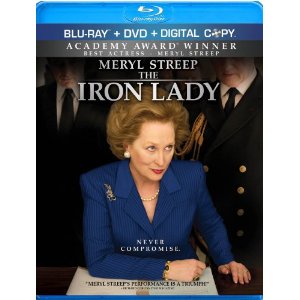 Margaret Thatcher is one of the most controversial figures in recent British politics, a equivalent to Ronald Reagan by many accounts. She made many decisions which were highly questionable, and yet the biopic about her has been limited to the controversy over her being female and the relationship she had with her husband, Denis (Jim Broadbent). These gender-based themes are only making more out of the fact that she was female than the effect that she had on the country. While it is true that she was the first and only female Prime Minister, Thatcher’s politics speak far more volumes than her sex.
Along with gender issues, The Iron Lady seems more than anything else determined to showcase Meryl Streep’s acting abilities. We all know that Streep can act. This was her third Academy-Award-winning performance, but she has been nominated for many more. We have all seen that Streep can act; now I would like to see her in some movies which show more than just that. The showcasing of her abilities seems to overshadow plot or direction in filmmaking for The Iron Lady.
Director Phyllida Lloyd’s first feature was Mamma Mia! This wasn’t a particularly high point in Streep’s career, but apparently they built enough of a relationship during that project to recommit for this one. I’m sure it sounded good on paper, but the film lacks any direction whatsoever. With a political figure who inspires strong opinions in everyone who was around to experience her unprecedented three terms, it is surprising to find that Lloyd and screenwriter Abi Morgan seem to have nothing clear to say about Thatcher or her politics.
The Blu-ray includes a making up featurette, as well as four bonus featurettes about everything from costuming to Thatcher’s husband, Denis. The combo pack includes a Blu-ray disc, a DVD and a digital copy of the film.
1 comment: 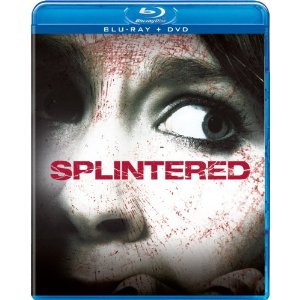 Splintered is just another one of those awful horror films attempting to latch on to the rise in popularity in the genre. For every successful mainstream vampire movie, we have two dozen straight to home entertainment. With Splintered it is the werewolf film which has been unnecessarily pillaged, and it is being done by director Simeon Halligan.
Splintered begins like so many other horror films, with a group of teens traveling to the woods for a weekend trip. Troubled Sophie (Holly Weston) is convinced that there is a beast lurking in the wilderness, one which is half human and half man. They bring a camera in hopes of discovering the legend, but instead find themselves hunted down one-by-one. There are few surprises within the film, except for how slowly it moves at times.
There is some action and some suspense, but a surprisingly small amount of scares for a horror film. While there are moments of expected violence and gore, it is so slow in reaching these moments that they are hardly as effective once they arrive. The Blu-ray high definition also does little for the unimpressive cinematography and effects. The special features include a behind-the-scenes featurette, as well as deleted scenes and a trailer.
No comments: 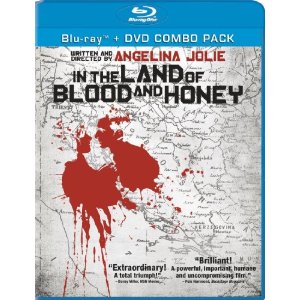 It is no surprise to find Angelina Jolie’s writer/director debut to come in the form of a message film, and the horrible sexual crimes committed by the Serbians during the Bosnian War is as good of a subject as any. This aspect of the film would have been uncomfortable and unpleasant enough, but the odd addition of a star-crossed lover’s storyline is unbearably abysmal by the film’s close. There is enough fact within the film to retain a valuable message, despite the fact that Jolie’s storytelling disturbs me.
Before the beginning of the war, Ajla (Zana Marjanovic) was just a simple Muslim artist and Danijel (Goran Kostic) was a Serb police officer. With the beginning of the Bosnian War, this all changed. However conveniently, Danijel turns out to be the son of a high ranking military leader in the surge against the Muslim people. This prevents him from rebelling entirely for his love, but he does all that he can to protect her just the same. At a certain point, however, she appears more of a sex slave than a lover.
The storyline itself is rather absurd, despite being set in a backdrop of very real events. Instead of facts, we are forced to endure poor melodrama between a few insignificant characters. This has moments of success, mostly due to good acting, though the film often lacks any direction. There are also many technical errors in the construction of the film which will bother all but the most ignorant viewers, who should not be watching this film anyway. Suffering during war has been minimized to horribly explicit sequences of rape. The Blu-ray offers them all in high definition.
The special features include a making-of featurette, and deleted scenes. The film was shot in because of the controversial views within the somewhat one-sided film. Exclusive to the Blu-ray is also a Q&A with Jolie and actress Vanessa Glodjo.
No comments: 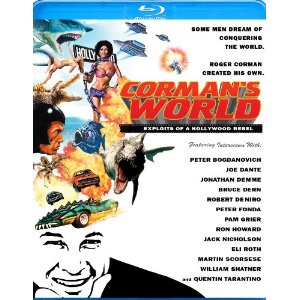 Roger Corman is a name synonymous with the B-films, the drive in disaster films which often featured creatures and bikini clad women. As the rating system was administered this turned into gore and nudity, as this unique filmmaker learned a way to make money off of bad filmmaking. This trick came in the form of genre pictures, which were made mainstream and big budget with the Blockbuster’s arrival in the late 70s and early 80s. Roger Corman was ahead of his time, often starting the career of many great actors and filmmakers, from Martin Scorsese to Jack Nicholson.
These and many more are here to give commentary on the man behind 60 years of filmmaking. Working as a writer, director, producer and any other job which would save on money if he did it himself, Corman once made 10 films in a single year. He was able to turn a profit on nearly everything he made, and continues to make films to this day. Director Alex Stapleton mixes together interviews with icons who worked with Corman along with archival footage and appropriate clips from some of the better (and worse) films.
Like a typical Roger Corman film, this documentary moves fast and wastes no time. It jumps through Corman’s career with the speed of solid entertainment. Most of the people being interviewed seem to be having so much fun talking about the legendary filmmaker that it becomes contagiously enjoyable to watch. The exception is Scorsese, who seems a bit too scholarly for this type of interview. It would have been nice if they had been able to get him to lighten up a bit more.
The Blu-ray includes a few bonus features, such as extended interviews from the film and a special message to Roger. There is also a trailer.
No comments: