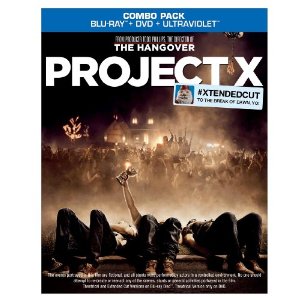 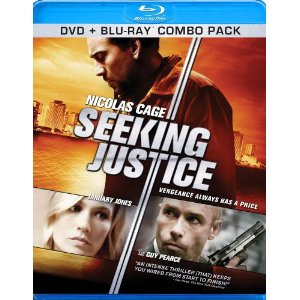 The storyline for Seeking Justice reminded me of Alfred Hitchcock’s classic Strangers on a Train, or the subsequent comedic remake, Throw Mama From the Train. It brings up an interesting concept in the natural tendency to long for revenge when someone we love is wronged, and provides a scenario which makes this vengeance nearly foolproof. What if we weren’t the ones to kill our enemies, but instead had a stranger do it for us while stuck in an airtight alibi? And what would be required in return for such a deal to be made.
Nicholas Cage stars somewhat unconvincingly as an ordinary man named Will Gerard, who is happily married to Laura (January Jones of TVs “Mad Men”). He is a nonviolent school teacher whose world is turned upside down when Laura is brutally attacked on her way home one night. Approached by a stranger named Simon (Guy Pearce) in the hospital waiting room, Will is offered the chance to make the attacker pay outside of the confines of the law. Simon informs Will that the only thing he needs to do in order to make this happen is promise a favor in the future. What Will doesn’t realize is how drastic of a favor will be asked of him when the time comes.
Seeking Justice weaves together the workings of an underground vigilant group, one in which anybody and everybody is a possible member. Instead of participating, Will remains morally rigid to his beliefs, despite having given the okay for another man to be killed for his crimes. This double-standard is never fully addressed, because this is a suspense film and we are to automatically take sides with our protagonist and his morality choices. The real point of the film is his ability to remain one step ahead of a secret group which has an unknown number of members within his city.
The Blu-ray is not spectacularly impressive, either in terms of visual improvement or bonus features. There is a behind-the-scenes featurette.
No comments: 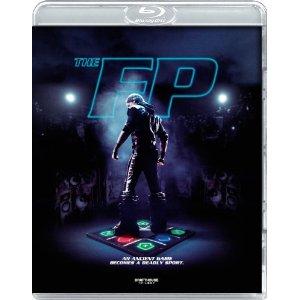 The FP begins almost exactly like the beginning of 8 Mile, which made me worry that this futuristic comedy about a Dance-Dance Revolution type game was actually a spoof. There are few films less creative or unique as those which merely make fun of more popular and successful movies. The FP is anything but unoriginal, however, and it has the ability to take its subject matter deadly seriously regardless of how silly it may be.
The film takes place in a future where gangland warfare is decided by playing a dancing video game called Beat-Beat Revelation. Though it is never explained how this occurs, the main character’s brother is killed during a match in the first scene by a rival gang. JTRO (co-director Jason Trost) must avenge his brother and take back the , otherwise known as The FP. He must do this in order to stop the rival gang, who control the local liquor store and have forced alcoholics to drugs by restricting what they sell. As a way of freeing the people to drink and avenging his lost brother, JTRO trains to fight in a dancing video game competition.
There really couldn’t be much sillier or stranger storylines as the one in The FP. The only thing to match the absurdity of the storyline is the dialogue within the film, which is made up of a variety of modern lingo and Ebonics. No sentence is given proper grammar and half of the things that the characters say don’t even make sense, but this is somehow the point of the Trost brothers’ vision, along with kinetic camera work and an unbelievably goofy story.
The Blu-ray comes with plenty of special features, including a commentary track from the Trost Brothers and a general making-of featurette. There is also a featurette about the real Frazier Park and a 16-page booklet insert with production photos and short essays by Rob Zombie, Mark Neveldine and Brian Taylor.
No comments: 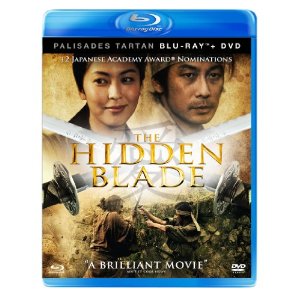 The Hidden Blade is a film about tradition and honor, in a time where these things were slowly beginning to fade. Samurai swords are being replaced by rifles and cannons to match the new Western way of fighting, and the samurai themselves are being taught how to become soldiers instead. All of this happens as one samurai is forced to pull his sword in battle for the first time and must choose between an old friend and the orders he is given by his samurai clan.
Katagiri (Masatoshi Nagase) grew to be a samurai during a time of tradition and respect, but he discovers that the honor he brings to his responsibilities are not the same as others in his clan. After hearing of his old friend’s imprisonment for being a traitor, Katagiri is chosen as the one who must face him in battle. Though he has no desire to fight his friend, Katagiri is forced to make an impossible decision brought on by his gluttonous and immoral leaders.
The Hidden Blade is not an action-packed film, but rather a movie about the characters and each individual decision they must make. The relationships remain far more important than any battle or fight scene, of which there are very few. The first portion of the film is much more concerned with the relationship Katagiri has with his long-time maid, Kie (Takako Matsu), who has served in his house since the passing of his father. Because they are of different castes, Katagiri and Kie are unable to wed, though he makes certain to protect her in any way he can.
Few films have the ability to approach their subject as slow and subtly as The Hidden Blade does, while still remaining interesting. This film is captivating from beginning to end, if only because of the characters and how they come alive through the storyline. Though there is one inevitable swordfight, even this does not serve as the climactic moment of the film.
The Blu-ray includes a number of special features, from a behind-the-scenes featurette to press conferences with the director and a feature from the Berlin Film Festival. The actual high definition is not altogether impressive. The film has a weathered period look to it, though it was only made in 2004. The image is not as sharp as you may have grown accustomed to with high definition, but the Blu-ray is worthwhile for the few moments which are apparently improved.
No comments:

Email ThisBlogThis!Share to TwitterShare to FacebookShare to Pinterest
tags The Hidden Blade 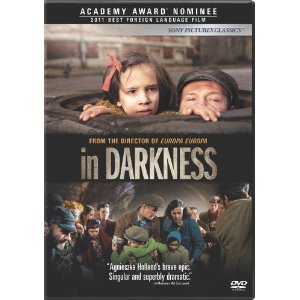 The storyline of In Darkness shares a great deal in common with Schindler’s List, in that it deals with a man who risks his own safety in order to help protect a group of Jews from the devastation of the German army during the Holocaust of World War II. First this arrangement is made merely for monetary purposes, but eventually becomes a moral decision alone. The fact that In Darkness is based on a true story only increases the impact of the content.
Taking place in a Nazi-occupied city in , a group of Jews begin an escape route into the sewers as a way to escape the ghetto they are confined in, but it ends up serving as an escape from the concentration camps. When they are discovered by a Polish sewer inspector named Leopold Socha, he agrees to use his unique knowledge of the sewers in order to hide them. He does so for a profit, taking advantage of the desperation in the Jewish survivors, though he changes his motives with time.
The practical issues with the fourteen months spent in the sewer are dealt with in the storyline of In Darkness, from the need for food to an unplanned pregnancy. Socha is forced to risk more and more as he deals with each unique dilemma, determined to protect them even when it means putting himself in danger in the process. In Darkness is a difficult film to watch at moments, especially at 144 minutes, but this 2011 Best Foreign Film Academy Award nominee is also not a film which should be missed.
The DVD includes a few spectacular special features, both with interviews from director Agnieska Holland (Europa Europa) and real life survivor Krystyna Chiger.
No comments: