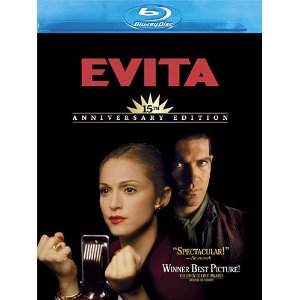 Evita
Evita was one of those highly anticipated, large-budget, overblown releases. There was no way that it could live up to all of the hype, as is the case with most adaptations of Broadway musicals. With Oliver Stone as a co-screenwriter and pop icon Madonna in the leading role, at the very least Evita should not have been as big of a flop as it was. For those who weren’t quite as disappointed as I was, the release of the 15th Anniversary edition of Evita on Blu-ray disc is something to celebrate.
The story tells the true-life story of Eva Peron (Madonna), a woman who went from poverty to fame in her impoverished country, all thanks to the choice she had in men. These men she had to choose from are played by Antonio Banderas and Jonathan Pryce. These decisions lead to a controversial life, albeit one which changed her home country of .
The film adaptation of Andrew Lloyd Webber’s musical sensation may not have impressed me, but the high definition of the Blu-ray enhances the musical elements as well as the large-scale production values of the film. Poorly made in some ways, there are still a great many elements which are enhanced by the high definition Blu-ray release. The Blu-ray also comes with a few previously released special features. There is an extensive making-of featurette, as well as a music video by Madonna with one of the film’s songs.