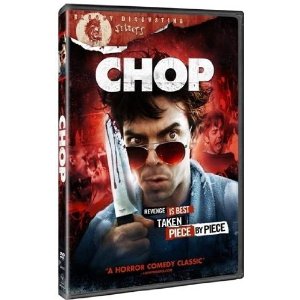 Chop takes the torture-porn movement in horror film and makes it humorous. Who knew that being ties up to a chair and hacked to buts could be as much fun as Chop is, however thin the material is stretched in 84 minutes time. The only thing missing from the film are characters that are even remotely likeable. Because Chop is filled with all types of unsavory people, it is difficult to feel any kind of remorse when they are picked off by sudden acts of violence.

Lance Reed seems like an ordinary guy, albeit one with slightly few moral hindrances than the average man. When he is kidnapped and tied up by a stranger, Lance is forced to look back on all of his life’s worst deeds in attempting to figure out what the stranger is seeking revenge for. He humor from the film comes from each of the other people Lance has wronged besides the stranger, and the fact that he is unable to remember the one thing that will end his life.
Each of the people who are wronged and remembered before the stranger are invited so that they can also take their pound of flesh. Usually they tend to be too unpredictable for this arrangement to end pleasantly, but Lance loses a little bit of his body with each revelation. Troma veteran Trent Haaga makes his directorial debut with this vulgar comedy of gore. The DVD includes outtakes and deleted scenes.