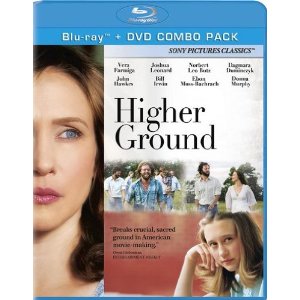 Faith is always difficult to capture on film, if only for the simple fact that it is an invisible element within a person. It is also difficult on film because of how quickly the subject becomes saccharine and a bit reminiscent of Sunday school. Neither of these issues are a problem for Higher Ground, a rich drama about faith which never attempts to give answers as much as document the experience. It never preaches and never condemns, but simply shows one woman’s struggle to keep faith in her own way.
Inspired by the memoirs by Carolyn S. Briggs called “This Dark World,” Vera Farmiga directs and stars. The film follows the young woman as a teenager, from surprise pregnancy and shotgun marriage to a mid-life crisis years later. There is a great deal of emotional drama within the film, and most of occurs when our heroine stands out in her congregation and community of rigid religious members. Scolded for preaching to the congregation, as it is unfit for a woman to do, it is not surprising that she begins to stray away from the pack.
The Blu-ray includes deleted scenes and a making of featurette. The feature film also has an optional commentary track with Farmiga, actor Joshua Leonard and producer Renn Hawkey. There are additional special features, though the high definition presentation left nothing to be desired. Sometimes independent films are better left in standard definition, but this is not the case with Higher Ground, a visually satisfying film as well.