I approached expecting mumblecore meets Mad Max, but instead found more of the first and little of the last. This is not to say that the film has no merits, because there are some spectacular elements to the unique film. It is because of the excellence in some aspects of the film that the lack of direction is so utterly disappointing. Technically speaking, the film is an excellent independent film, but somehow I expected more than an expected storyline filled with all of the infuriatingly circular melodrama of mumblecore cinema, unlikable characters and awkward nudity included.
At the center of is a friendship between two guys named Woodrow and Aiden. Their friendship far surpasses any other relationships within the film, and these two slackers spend most of their time drinking and trying to build a flamethrower. Their ultimate goal is to build a car which is prepared for the apocalypse, named Medusa. This is interrupted when Woodrow meets a girl named Milly at a bar. This relationship pulls Woodrow and Aiden into a new group of friends and more belligerent drinking behavior, including more than the occasional fight. This behavior escalates to violence which is in its own way apocalyptic.
This film is much more a showcase for filmmaker/star/producer/editor Evan Glodell, who also built custom cameras and all of the inventions within the film as well. The highlight of the film is Medusa, which is a practical 1972 Buick Skylark Glodell actually modified with a fire-spewing exhaust. Glodell is no doubt talented, though it seems to me that he would be better off leaving the writing to someone else next time. Attempting to do too many things on your own can often end up hurting a film, which is ultimately meant to be a collaborative effort.
The Blu-ray/DVD combo pack comes in a spectacular box set with great artwork. The visual style of the film is fantastic, and the Blu-ray brings out the excellent qualities in Glodell’s custom cameras. The two-disc special edition has one disc for the DVD and another with the Blu-ray. The special features include a behind-the-scenes look at the making of this unique independent film, as well as a featurette looking at the actual Medusa creation. There is also a trailer and outtakes from the set. 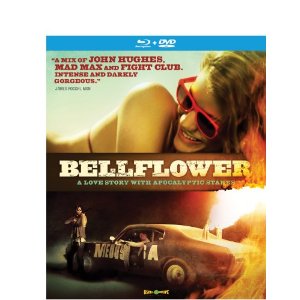