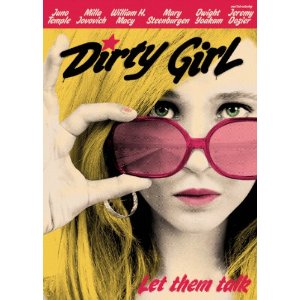 It used to be that the period coming-of age films usually took place in the 50s, or 60s. At least that’s the way it was during the 80s and the 90s, but now these films are beginning to take place in the 80s. From the poor Brett Easton Ellis adaptations to films like Adventureland and Skateland, the 80s are fueling the period coming of age tales. Dirty Girl is the latest addition, and it is also a road trip. John Hughes meets Little Miss Sunshine in the tale of a girl with a bad reputation and a boy hiding his sexuality on a road trip to find a long-long father.
stars as Danielle, a girl who has a bad reputation for her sexual prowess at in , circa 1987. Her reputation is far worse than her actual behavior, though her lewd grammar eventually has her banned to the remedial classes and paired with closet homosexual Clarke (Jeremy Dozier). These two develop a bond together and Clarke helps Danielle run away to to find her father when her mother (Milla Jovovich) announces that she is engaged to her religious boyfriend.
Clarke has his own issues to run away from as well, including his abusive and homophobic father (Dwight Yoakam). Clarke’s mother (Mary Steenburgen) has sympathy, however, and she sets out on the cross country journey to get her son back. There is a lot going on in this film with a lot of good actors, but it all plays out rather simply. It isn’t a remarkable film, but you could certainly do worse.
The DVD special features include a feature commentary with writer/director Abe Sylvia, as well as a few deleted and extended scenes which are not anything you wouldn’t expect to see on the cutting room floor.