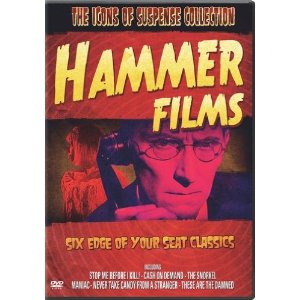 Hammer Films may have been best known for their straight horror films, with creatures and monsters galore, they also made some rather fantastic suspense films with little to no violence/gore. The only monsters are men and their gnarled humanity. The variety of the films is refreshing, but there is no bad film in the bunch. Only one film seems slightly out of place with a futuristic and science fiction twist, but this is also one of the better known films in the collection.
The three-disc set includes six classic suspense movies from Hammer Films. The first disc includes Stop Me Before I Kill and Cash On Demand. Stop Me Before I Kill is a lost gem from Val Guest, a film about a race car driver (Ronald Lewis) with repressed memories from a car crash. What he is left with after the accident is a violent compulsion to strangle his wife (Diane Cilento). He begins therapy with a doctor met on their honeymoon, though there is no telling if it will work in time. Cash on Demand is a clever film that takes place entirely in one location; a small bank carrying a holiday load of money. Peter Cushing and Andre Morell carry the film as a discreet and clever bank robber and the uptight manager he uses in his plan.
The second disc includes The Snorkel and Maniac; two family melodrama suspense films. In The Snorkel, a young girl is convinced that her stepfather is a murderer. She is convinced that he is coming for her next, having killed her parents. Snooping for evidence she discovers that his passport has stamps that provide an alibi, until she discovers his method for crossing borders undetected. Maniac is similar and completely different, about a father put in an asylum when he murders a man for pursuing his daughter. When a stranger comes into town and takes an interest in the girl years later, the mother pulls him into a wicked scheme.
The last disc includes one of the more controversial films, talked about far more than it is seen. Never Take Candy From a Stranger is a startlingly realistic look at an old man that is a pedophile in a small town. Because he has the money in town, most just ignore his behavior and instruct their children to stay away, but when he tales a liking to the daughter of the new school principal, it causes problems for the whole town. The last disc also includes These Are the Damned, a strange film about radioactive children living in a hidden fortress to await the end of the world.