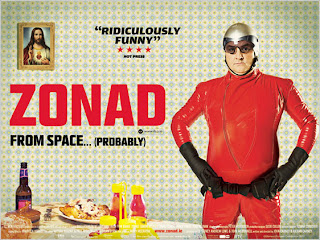 Absurdly silly and a little bit naughty, there is a certain charm to the low-budget quality of Zonad. The storyline is a little weak and the characters are never fully developed, but it still plays out rather comically and never truly slows down enough for its faults to matter much. I can’t imagine thinking about this film, or discussing it to any great length, but watching it was enjoyable enough.
After having a discussion about spacemen during an evening of stargazing, a small-town family returns home to find a strangely dressed man passed out in their living room. This man (played by Simon Delaney) is actually just a thief who has escaped from a rehab clinic during a costume party, but he uses the gullible nature of the family to get free lodging and food. Soon the entire town believes he is a spaceman and the thief begins sleeping with women and drinking in excess, until another escaped patient threatens to steal his glory.
Zonad comes from John and Kieran Carney. John Carney was the director behind the surprise hit Once, but you would hardly know it by watching this film. They couldn’t be more different from each other.

Email ThisBlogThis!Share to TwitterShare to FacebookShare to Pinterest
tags Zonad