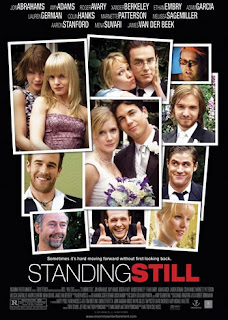 There is somewhat of a gap in the world of film, and it happens from the age of about 21 to 28. All of the younger actors that played high school roles on television or in film eventually get old enough that they cannot convincingly play that age anymore. After that there are very few roles until the actor is old enough to play late twenties without audiences remembering them in their youthful roles. Standing Still is an amazingly large amount of these actors, most trying adult roles out for the first time. At times it seems more like the life that the actors would have in their late twenties rather than the average person, but it takes place in and we are meant to believe that everyone that grows up in becomes rich and famous.
Elise (Amy Adams) and Michael (Adam Garcia) are the perfect couple who have been dating since college. They are lucky enough to have a beautiful house, an upcoming wedding, and a crew of close friends, all coming into for the weekend celebration. As they each arrive at the house, the reunions quickly turn into awkward meetings that bring up both sweet and painful memories. Rich (Aaron Stanford) and Samantha (Melissa Sagemiller) are the best man and maid of honor who are also considering marriage. Lana (Mena Suvari) is a neurotic actress with an unstable love life.
When all the men she's ever slept with, the forlorn Pockets (Jon Abrahams), children's show host Donovan (Ethan Embry), and drunken actor Simon (James Van Der Beek), all show up for the wedding, chaos ensues. Rounding out the group are Quentin (Colin Hanks), a fast-talking agent who falls hard for the bride's sister (Marnette Patterson), Jennifer (Lauren German), the bride's former roommate with a secret, Franklin (Roger Avary), the definition of a wacky Hollywood director, and Jonathan (Xander Berkeley), the groom's long lost father battling addiction, attempting to reenter his son's life.
Essentially it is half comedy of errors and half sentimental melodrama, and although it isn’t entirely profound, it is a fun journey. I found myself entertained, if only because all of the actors are extremely talented and charismatic. Every one of these actors seem to bring their own unique quality to the film, but each of them have something that allows them to stand out. This makes for interesting scene after interesting scene, simply because of good acting. James Van Der Beek is especially enthralling in a role that is quite different than ’s Creek, or any other nice guy character he has played. Jon Abrahams may have one of the saddest faces in , and he is picture perfect for Pockets, the loneliest guy in the film.
There is no real substance to the film, and for that reason it isn’t surprising that critics are not too fond of it, but audiences may love it. It is fun and energetic without ever being completely dull. The humor is slightly sophomoric at times, but nothing too intense. Mostly it is just good clean fun in a candy coated shell.