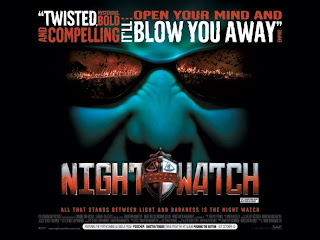 Russian film history was never an area covered in the classes I took in school, and as I think back to try and remember films from which have impacted me, I couldn’t even fill one fist with titles. For years films weren’t made in Russia, and now that they are being made, we hardly hear about it, but Night Watch is about to change all of that. Night Watch has already broken records all over the world, and can now be seen in The United States. Upon its release in in 2004, Night Watch surpassed even Spider-Man 2 and Lord of the Ring: The Return of the King in box office, and this came from a film which only cost four million to make. It’s an incredible achievement, and I haven’t even begun to review the film yet.
Night Watch takes place in modern , but it could take place in any city. It is a story about good and evil, quite literally. For over 1000 years the world has been secretly policed by other beings, who in the technical terms are actually vampires. These “Others” make a choice upon realizing they are different. They either choose to be light or dark, but both side spends its time watching the other to make sure the rules are being followed, and humans are allowed to make their own decisions toward good or evil. The light others spend their nights watching the dark others.
This is the first in a trilogy of fantasy action films, and it takes its time to slowly allow all of the rules in this new world to come to the surface on their own through natural conversation. This means that at least the first half of the film is spent trying to understand the world we are being brought into. This makes it difficult to enjoy, but it also gives a certain silent credibility to the material as well. It is also very apparent that things have purposefully started out slow in this first film, but that they will build in the next two films. While The Matrix trilogy suffered because there was nowhere to go after the first film, this series has learned from those mistakes.
The style of the film is so scattered and somewhat nauseating, I longed for a simple steady shot. There really is nothing simple about Night Watch. Even the subtitles are so creative that I can’t help but wonder what entertained the Russian audience during moments of lull in the action. At times the visuals are a bit more than my brain could happily accept, and by the end of the film my head hurt slightly, but I was also very involved in the story. Even with my head hurting I would have sat back down and watched Day Watch if it were available, because that is how successful Night Watch was at getting me interested.