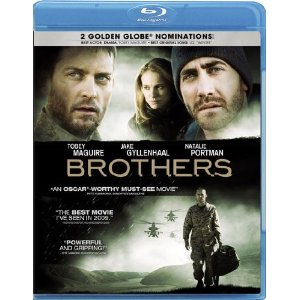 There was a great deal of attention given to the escapist entertainment of 2009, while a film like Brothers quietly passed under the radar. As the latest film from director Jim Sheridan and an adaptation of a Danish film of the same name, Brothers could not be further from the trends of 2009, but it is a powerful piece of filmmaking that should not be ignored on DVD and Blu-ray. This is a rare film which addresses real and current issues without providing a message that makes the drama simply a tool for driving opinions into the audience. Instead, Brothers is a story which looks much more inward than you may expect from watching the love-triangle trailer.
The conflict in Brothers centers on a family unit, a strength in nearly all of ’s previous works. Captain Sam Cahill (Tobey Maguire) is about to leave on his fourth tour of duty in when his black sheep brother, Tommy (Jake Gyllenhaal), is released from prison. Their father (Sam Shepherd) makes no secret about which son he is proud of and which he is ashamed of, and this relationship becomes even more tense when Sam is reported killed in action.
While the audience is in fact privy to the knowledge that Sam has survived and is being held captive in the remote hills of , Sam’s family believes he is dead. Sam’s wife, Grace (Natalie Portman), takes the news very carefully. She has their two daughters to consider and doesn’t allow herself to break down, but Tommy allows himself a drastic and harsh reaction to the news. As a way of making up for this outburst, Tommy begins spending time trying to fill the void of his absent brother.
The relationship begins rocky, but as Tommy grows closer to her children, Grace warms up to his presence. The film is not about what their relationship develops into, but rather the impact that the situation has on each of their lives. They all go through some intense emotions, almost entirely internally. It is not only a testament to the cast when a film works as well as this one does, especially with all that is left unsaid. Even more so it says something about the director when each of the leads give the performance of their career. Tobey Maguire, in particular, is shockingly convincing, and Gyllenhaal shows why he does better with the right director, though most of his film choices now seem a testament to the right agent.
The Blu-ray includes a feature commentary by ; a feature which immediately increases the value of the film and disc. There is also a featurette about the adaptation from the Danish film and a featurette about ’s experience with family melodrama.