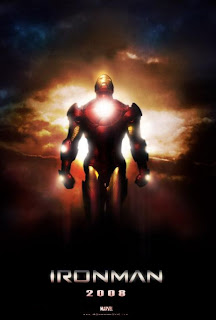 When superheroes first emerged in American culture with the prototypical emergence of Superman in 1938, they quickly became a social role as a moral prototype to give hope and guidance during difficult times, especially war. Comic book superheroes were often born out of war, including Iron Man, who became a superhero through his experience in the Vietnam War when he emerged in 1963. With this being the case it would seem that there would have emerged new or updated superheroes recently, but the success of the onslaught of comic book films on screen has mostly seemed a way for studios to cash in on a popular commodity.
Superhero movies seem to struggle most when they aren’t helping anyone, because after all, isn’t that what a superhero is supposed to do? The recent past has seen its fair share of these films, and an increasing number fail to appease the crowds or the critics, seemingly most often when the fight is not clear. Daredevil was a complicated comic-book world where there were more odds of encountering another superhero or villain on the street as you would a normal citizen, Elektra became even more muddled with plot and the superhero’s intentions, Ang Lee’s Hulk had an escaping creature never given an opportunity to be selflessly heroic, and The Ghost Rider was about a man that stopped one criminal and spent the rest of the film fighting otherworldly creatures in a human-barren city. Although Iron Man is another film with a superhero who rarely if ever engages the people he is fighting for, due to the remarkably concise and well-constructed way in which the film was scripted and directed there is never any doubt of the superhero’s intentions or what he is fighting for. 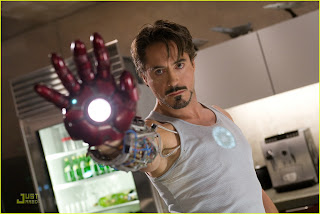 Much of the buzz for Iron Man has been surrounding Robert Downey Jr., an unlikely but extremely successful casting choice that looks likely to revive the veteran actor’s career just as Pirates of the did for Johnny Depp. stars as Tony Stark, the son and heir of a weapons manufacturing company on the cutting edge of supplying new weapons that are becoming more and more distanced from the battlefield. Tony is a brilliant engineer and infamous ladies man rich enough to have an assistant named Pepper (Gwenyth Paltrow) to throw the one-night-stands out in the morning. Tony’s latest invention is a missile system named for its ability to destroy an entire city with one push of the button. Stark is a technical genius reaping in all of the financial gain from creating more and more deadly weapons, until he is taken by a terrorist cell while in showing . After years of profiting from war, Stark is forced to witness it first-hand, afterwards leaving him a changed man in more ways than one. He awakes to find that a magnet is placed in his chest, pulling the shrapnel away from his heart as the only means of keeping him alive, but this physical change is no less significant than the emotional change which has occurred in Stark after witnessing war. Stark finally sees the damage he has caused with his inventions, and as if inter-connected, coinciding with Stark seeming to grow a heart is the physical representation of an invention in the center of his chest that is keeping him alive. 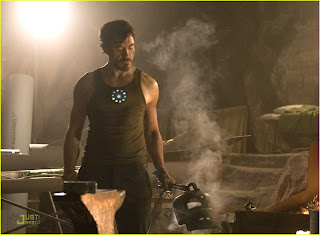 More than keeping him alive, Stark’s creation is a new type of energy source that is powerful enough to do more than just keep him alive. The terrorists hold Stark hostage knowing his abilities to create weapons, with every intention of killing him if he doesn’t build them a missile. Supplied with boxes of Stark’s own weapons stolen from the military convoy, Stark agrees to build a rocket, but instead begins building himself a suit fueled by his new ‘heart’. This suit is a rough version and although he is escapes, the suit is destroyed in the process. When Stark finally gets back home he announces that his company will no longer be making weapons before retreating to work on a revised suit, much to the disappointment of Stark’s father’s longtime business associate and board member of Stark Industries, Obadiah Stone (Jeff Bridges), who will eventually become Iron Monger, a villain Iron Man must face. It was an interesting and deliberate choice to make Iron Monger the villain instead of the many others in the series, and the reasoning is to allow Iron Man to fight the two-faced villains at home before fighting a war elsewhere.
The irony about the invention that powers Iron Man’s suit, as well as providing a necessary health service, is that the technology is made possible by an alternate fuel source, and yet everyone seeking the technology of the suit is far more interested in using it to advance weaponry. Although Iron Man never makes direct reference to the American’s involvement in the Middle East in regards to fuel, there are other indicators throughout the film suggesting the war mongers of this country are more interested in being perceived as the most powerful nation than any of the means to be gained. This is proved once when the technology is used by Tony’s very own weapons company to create a larger and more aggressive suit with the alternate fuel source, and a second time when this larger suit throws Iron Man into a semi-truck with an advertisement for Hydrogen energy. The truck along with the advertisement is destroyed, once again showing the preference to power over real solutions. 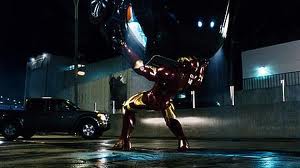 During the presentation Tony gives of , before growing a new artificial heart, he defends the logic of a weapon that is so powerful you only have to use it once. He convincingly claims that it is the “American way” to win with a bang, or as a confrontational reporter puts it, by creating peace by being the one with the bigger stick. Only after his ‘change of heart’ does Tony realize the problems behind this method of fighting wars, deciding that there has to be a better way to fight a war. Suddenly Tony is fighting against the very system he was working with, realizing he must change the system from within. In one scene when Tony walks into a demonstration for pilot-less aircraft he remarks that it should be the other way around, which is certainly meant to be taken as a joke since we know he can fly in his Iron Man suit, but it also points to the implications of Iron Man today. Tony Stark is a man who used to help fight wars from the luxurious distance and comfort of his home in the , but once he is physically faced with the disastrous effects of this distanced warfare he becomes A superhero takes on a social role, standing as a center of moral righteousness, making difficult decisions and personal sacrifices for the good of humanity, and it is no coincidence that Iron Man seems remarkably relevant today, as he is perhaps the first truly relevant superhero to emerge for this generation.
Although Iron Man spends most of his energy fighting the system from within the , there are a few instances when he personally engages in battles in the , at one point even saving an individual family. We see the close-combat as a positive alternative, allowing Iron Man to destroy the gun-wielding enemies without harming any innocent lives, but I wouldn’t suggest that this is a suggested military tactic by the filmmaker’s. Instead, Iron Man seems to be an earnest and heartfelt moral outcry for a world where we become personally invested in wars we believe in, rather than distancing ourselves to the point that justification of means can become easier. Just as with the many failed comic-book adaptations listed in the first paragraph, Iron Man victims that are rarely seen in the film, but even when Iron Man is having a robot brawl in it is clear what he is really fighting up against. 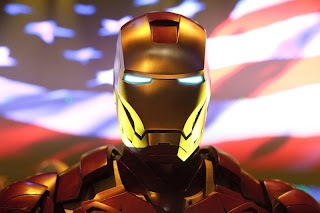 Iron Man seems to be most impressive when considering the elements that were most unexpected. Downey Jr. is a prime example, beating out Tom Cruise and Nicolas Cage for the role, as is director Jon Favreau. Favreau has consistently as a director been able to combine things from the past with the relevance of today, and Iron Man is only the most recent proof of this. Favreau’s theatrical film debut was Made (2001), an independent comedy about incompetent men hired by a mobster in to take a trip to . Made was followed by Elf (2003), a film that combines all of the nostalgia of classic holiday entertainment (singing, stop-animation characters in the North Pole, and continuing with family entertainment there was the science-fiction adventure Zathura(2005), which was adapted from the children’s book by Chris Van Allsburg. Iron Man successfully brings the metal hero into modern day problems and issues, which were handled and discussed in a responsible manner without sacrificing the spectacle everyone has come to expect of superhero films.