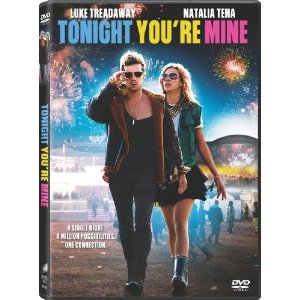 Tonight You’re Mine is far more charming and humorous than I expected, despite the transparency of the romantic comedy storyline. It has a premise which calls for immediate suspension of disbelief, but a mixture of good music and some great performances, this is easily accomplished. Somehow Tonight You’re Mine makes predictable look fresh and unexpected.
The film jumps right into the plot after one quick musical number, when an American pop star named Adam (Luke Treadaway) is ambushed by minor British girl rock band lead singer Morello (Natalia Tena). They are both scheduled to play the same music festival in , and their personalities immediately clash for somewhat unclear reasons. This banter is interrupted by an eclectic preacher who handcuffs them together.
Both of the musicians have sets to play at the festival, which makes being joined together inconvenient. Even more of a problem is the fact that both of them are in a relationship. Morello is dating a far too reasonable banker, who is understanding and compassionate to the situation. Adam is dating a high maintenance model, who is far from okay with her boyfriend being attached to another woman. The result of a night handcuffed together, even with significant others present, causes a predictable rom-com conclusion.
The DVD release includes a making-of featurette, as well as interviews with the stars and two additional features on the music and the costumes.