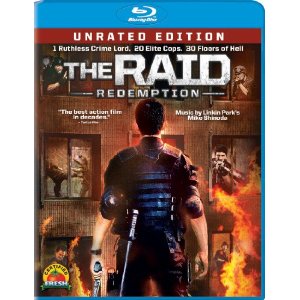 Few action films have the ability to deliver in the way that The Raid: Redemption does, practically reaching through the screen and jabbing your windpipe with the amount of intensity and violence fit into the 100-some minute run time. This is everything that American action should be but doesn’t have the balls to execute; The Raid is simply a testosterone-filled masterpiece to be endured as much as enjoyed. What’s more, the actual making of the film is in itself a work of art and something to be admired. The physical abilities of the actors are impressive with no need for an onslaught of computer generated special effects.
The simplicity of The Raid is what allows for such non-stop action spectacle. Deep in the slums there is a building which is run by a crime lord. He charges rent to lowlifes and criminals who need to hide out from the police, and it has long been thought impenetrable. When 20 elite S.W.A.T. members attempt to raid the building in the early hours of dawn, the mistakenly find themselves trapped on the inside with a building full of dangerous killers.
One of the cops secretly has a brother inside of the building, and he must find a way to survive while also searching for him. Quite quickly the guns are taken out of play after a number of the S.W.A.T. members are taken down in a gunfight. Much of the film is hand-to-hand combat, using fists, feet and whatever weapon happens to be nearby. The physical feats are amazing and the choreography is so meticulously planned out that it manages to look seamless and natural. There is a fluidity matched with brutality, making this some of the best fight choreography you are likely to see on film.
The Blu-ray release includes over 100 minutes of special features, including seven featurettes on the making of the film. These include featurettes for the stunts, the music by ’s Mike Shinoda and the generic making-of features. There are also filmmaker video blogs and a director’s commentary. All of this is great, but nothing compares to the pulsing pounding intensity of the high definition presentation of this instant action classic.