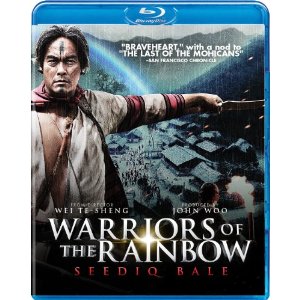 Warriors of the Rainbow: Seediq Bale tells the little known tale of a Taiwanese aboriginal tribe who stood up to the oppressive inhabitation of Japanese soldiers between 1895 and 1945. This true tale of injustice and uprising is little remembered even in the country of its origin, though it is a story which could easily be found with any colonists in an uncivilized area. It is a universal story of basic freedoms and quality of life, and what a group of people are willing to sacrifice to get it.
Before the arrival of the Japanese, the tribes living on the Taiwanese island fighting each other. They battle over hunting grounds and beliefs, but find themselves a common enemy after years of occupation and abuse by the Japanese. The head leader of the Seediq tribe, Mouna Rudo (Lin Ching-Tai), eventually reaches the point where he is no longer willing to comply with the demands of the Japanese. Combining forces of the other tribes in order to destroy a common enemy, they plot an uprising against the colonial masters.
The Japanese do not take this defeat lightly, sending in all of the powers of war that the aboriginal people do not have. Soon it is a battle against aircraft and poison gas, though the locals have the advantage of the jungle terrain they are familiar with. Using a form of guerilla warfare which often includes decapitations, these tribes fight back against the Japanese even when it seems a lost cause.
Warriors of the Rainbow is the highest budget for any Taiwanese film ever made, and part of this must have to do with having John Woo as a producer. The production values are top notch, making the Blu-ray high definition the way to watch it at home. The bonus features include a making-of featurette, as well as behind-the scenes footage and a featurette on make-up and visual effects in the film.