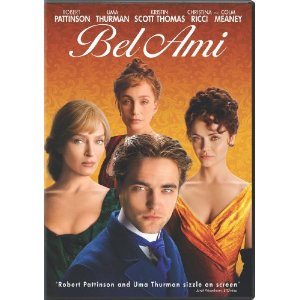 Bel Ami is based on Guy de Maupassant’s classic novel, and it sizzles to life onscreen with an impressive array of talent within the film. Robert Pattinson is the least impressive as the leading man, though it is a role which asks little more than for him to give smoldering looks of longing for a majority of the film, which we already know he has perfected from his time as a vampire. The female cast members are what give the film its vibrancy, just as the female characters are the ones who ultimately control the storyline within Bel Ami.
Pattinson stars as a penniless ex-soldier named Georges Duroy, a man who makes his way in turn of the century by seducing the right women. His first and seemingly most sincere affair is with Madame de Marelle (Christina Ricci), whose husband is often away. This affair continues even after Georges marries the former wife of the man who brought him into the world of wealth, Madeleine Forestier (Uma Thurman). It no longer is about sex when he seduces the wife (Kristin Scott Thomas) of the man at the top of the food chain.
There is plenty of bed-hopping in Bel Ami, with an appropriate amount of flesh to entice audiences with. The true heart of the story lies not in the sexual acts, but the purposeful betrayal that goes with these adulterous moments. It is like a game of chess, and Georges has decides to use his good looks in order to play several queens on the same board at once.
The DVD includes a behind-the-scenes featurette.