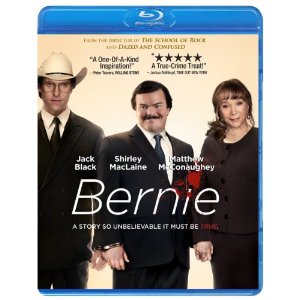 There have been many mockumentaries, which film as though they were a documentary and have interviews to carry the film along. Bernie gets about halfway there, including the talking head interviews while also having filmed sequences without bothering to make it appear as though this section was a documentary. It blends both together, which is fine since we know we are watching a film anyway. Whether or not he is addressing he camera, we know that Matthew McConaughey is just acting.
Based on an actual true story, Bernie tells the bizarre tale of an unlikely friendship which ended tragically. Jack Black stars as assistant funeral director Bernie Tiede, a man who was extremely friendly with the elderly widows of men who passed through his funeral home. Though he was clearly gay, Bernie developed a close and intimate friendship with Majorie Nugent (Shirley MacLaine), a wealthy widow with a nasty temper. These two quickly became inseparable, traveling everywhere together. Although it was her money that allowed Bernie to live the high life, many saw him as the kinder one in the relationship.
A large portion of the film deals with the aftermath of Bernie’s final breaking point with Majorie. After being belittled and yelled at one too many times, Bernie takes actions into his own hands to silence her for good. This results in a monumental trial in which a beloved member of the community is put up in public as a murderer. Even with a confession, Bernie still managed to have the confidence of his friends and neighbors.
The Blu-ray release of Bernie includes three featurettes and a few deleted scenes. The featurettes include one particularly good one about the adaptation process of true story to screen, including the research Jack Black did.