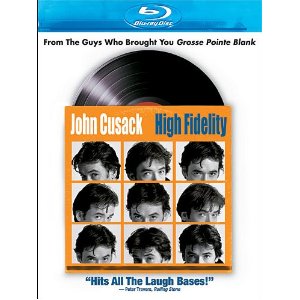 “High Fidelity” by Nick Hornby is the ultimate break-up novel for guys, and one I have read at least a dozen times. Many of Hornby’s books have been made into films, including About a Boy and Fever Pitch, but I have always most preferred High Fidelity. Although the novel is adapted to take place in instead, the film version still remarkably faithful to the book. And there is no denying the perfection in casting within this film, from Tim Robbins as the douche upstairs neighbor to Jack Black as the loudmouthed record store employee.
John Cusack carries the film as our protagonist and narrator, Rob Gordon, the owner of a rundown record shop which frequently scares away more customers than it encourages. When Rob’s girlfriend Laura dumps him, he is forced to cope in the only way he knows how: by making a list. Listing his top worst break up stories, Rob returns to the scene of each relationship to try and figure out what has gone wrong in his life. The journey of romantic self discovery is often comically cynical and selfish. In other words, it is a perfect break up film.
This classic Cusack comedy finds its way onto Blu-ray high definition for the first time. Though there are not many visual effects to be enhanced, this is clearly a sharper image than the DVD copy I have held onto for so many years. The special features include a conversation with star/wrier/co-producer Cusack and director Stephen Frears, as well as a few deleted scenes.