New to Blu: Adventures in Babysitting 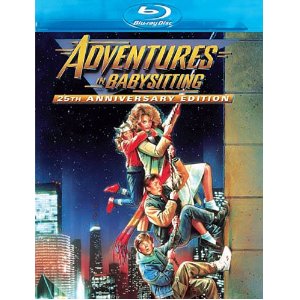 When I heard that David Gordon Green was making babysitter action comedy The Sitter, my first thoughts were of Adventures in Babysitting. It had been years since I had seen the Chris Columbus 80s family comedy, but as a child I am sure that I watched this film a few dozen times. Sometimes films like this don’t stand up when watched years later, but Adventures in Babysitting is just as great as I remember it being.
A young Elisabeth Shue stars as Chris Parker, a teen with a babysitting job that goes wrong. After plans are canceled with the guy she is dating, Chris agrees to watch two kids and their friend expecting it to be a dull evening. Instead Chris is pulled into a dilemma when her friend calls from desperate for a ride to the safety of the suburbs. Chris takes the kids and journeys into the dangerous and unpredictable city for a night of excitement beyond her belief.
From a blown out tire to an encounter with an underworld operation, anything that can go wrong does for Chris and her cohort of kids. It is equal part action and comedy, but one hundred percent fun. The high definition presentation on the 25th Anniversary Blu-ray edition is sharp and clear, which is good considering there are no special features. It is all about the presentation of the film, and that is well worth the upgrade from DVD for fans of this film.