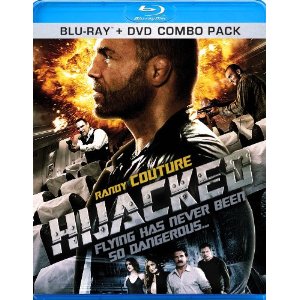 Hijacked has one of those plots that seems ripped straight from the glory days of 1980s action. These sort of terrorist situations dropped off for a bit after 9/11, but Hijacked hits back hard without any consideration of a national tragedy. Instead it simply returns to the basics of action, however ludicrous it is at times. Part of this comes from the acting and pretty much anything that is happening in-between the action sequences.
UFC legend Randy Couture stars as a government agent who discovers a plot by a powerful international crime syndicate and does anything he can to stop it, despite the disbelief of his superiors. When it turns out that he is right, Paul Ross (Couture) is stuck on an private airplane while it is hijacked by a group of terrorists demanding a $2.73 billion ransom. It also happens that Ross’ ex-girlfriend (Tiffany Dupont) is also on the flight, giving him additional reason to take down the bad guys.
Despite a supporting cast of Dominic Purcell (“Prison Break”) and Vinnie Jones (Snatch), the most difficult aspect of Hijacked is the acting. It isn’t as though the dialogue written is a masterpiece, but all of the actors involved seem to butcher it beyond belief. There is more stiff and unnatural acting in this film than should ever have been allowed, regardless of the bullet or body count within the film.
There must be a general consensus that Hijacked is not a masterpiece, because it was given very little treatment on Blu-ray. Aside from the high definition presentation of the entirely below average action film, there are no features to be spoken of on the disc.