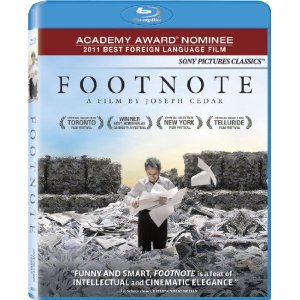 Footnote is simple film made complex because the characters within it are so well written. In the hands of a less capable filmmaker, a less nuanced screenplay or less talented actors, Footnote could easily have been a transparent muddled mess. Instead it is a complex film in which our understanding of the characters shifts as we see their behavior in different situations. At the heart of this film is a tale of a father and son in heavy competition, as well as the honest intentions of each under the surface. All of this is played out with a comedy of errors aspect, a simple misunderstanding which has drastic effects in the lives of this particular family.
The catalyst for the misunderstanding in Footnote comes from the fact that both Eliezer and his son Uriel are both scholars in Talmudic Studies. Eliezer has spent his life researching something which was then proven correct by another scholar. He struggles with feeling irrelevant, while also watching his son become a rising star in the field. When Eliezer receives a call telling him that he has won the highly coveted Israel Prize, he is finally validated for his lifetime of struggle. The trouble is that the call was meant to go to his son, a professor sharing the same last name.
This mistake allows for us to watch the reaction from each of these men. They are each given the opportunity to be a bigger person, and it is surprising to watch the outcome. The examination in human nature is compellingly real, and neither man is simply good or bad. They are both flawed in their actions and character at times, but this does not prevent them from being capable of good deeds as well.
The Blu-ray release of Footnote includes a behind-the-scenes featurette and an evening with writer/director Joseph Cedar. The high definition is actually quite good in this film, which despite being primarily dialogue filled has some visuals which are enhanced as well.