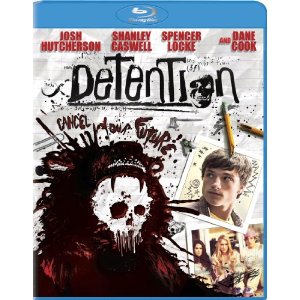 Detention is like a horror comedy made for children with attention deficit disorder. It is part Scream, part Scott Pilgrim vs. the World and part Donnie Darko, all rolled up into approximately 93 minutes of run time. Whether or not Detention is a good film is up for debate, but it would be difficult to call this film boring or predictable. It also happens to be visually dynamic and stylish, which does not hurt the cause.
Referred to as a hipster horror film, Detention begins with the bloody murder of a high school cheerleader. A popular horror franchise has a new film coming out and all of the popular kids will be there to see it. In the meantime one of their classmates is dressing up as the film’s killer, Cinderhella, and killing off random members of the student body. The students at should probably be more concerned with this than they are, all preoccupied with their own weird stories which range from a football player with fly genes in him to a time traveling mother/daughter body swap. This is a strange film which is about a dozen different things and nothing all at once.
Joseph Kahn’s dynamic horror comedy may not be for everyone, but it is worth checking out for any horror fans jaded by the predictability of the genre. This is a tongue-and-cheek horror film; a movie for people who watch too many movies. The cast helps with the fast-paced dialogue, though ironically it is Dane Cook who speaks the slowest in this film. Josh Hutcherson and Spencer Locke also star. The special features on the Blu-ray include a behind-the-scenes making-of viewing mode, called the Cheat Mode. There are also screen tests and footage of the rehearsal for the fight scene. There is also a little bit of random additional footage of Cook on set.