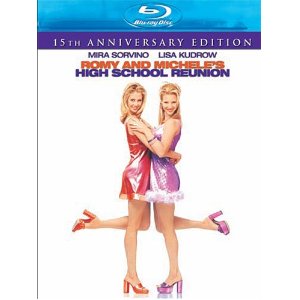 Back in the 90s the cast of “Friends” was making more than any other sitcom stars of the time or before, but that didn’t stop most of them from also attempting a film career on the side. Some were more successful than others, but for Lisa Kudrow, Romy and Michelle’s High School Reunion was perfect casting. The problem many of the show’s actors had was difficulty finding roles. Most often audiences just wanted to see them playing the same character we had grown to love on television, so it was perfect for Lisa Kudrow to play another airhead of sorts.
Kudrow co-stars along with Mira Sorvino as the two title characters, Romy and Michelle. When their ten-year reunion arrives, these women are little more than grown party girls with a carefree lifestyle that is far from impressive, so they decide to make up a business to brag about when they go to their high school reunion. This plan is foiled by a former classmate with a grudge, played by Janeane Garofalo. The goal is for Romy and Michelle to feel important and significant again, and they will stop at nothing to achieve this, often with disastrous results.
The Blu-ray release of Romy and Michelle’s High School Reunion includes a production featurette in the special features, which was also released on the DVD. The high definition is the primary reason for the Blu-ray upgrade, and it looks as good as possible. The 90s had some quirks in the cinematography which often comes up in high definition, but the picture is as good as it will get for Romy and Michelle.