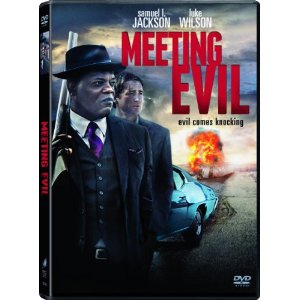 It still baffles me how hugs stars can end up in such small and mediocre films. Perhaps it is the budget or simply a need to continue working through the downtime. Maybe a concept sounds good at first and slowly unravels in the constructions. Whatever the reason, Meeting Evil has the cast of a theatrical feature and the execution of a straight-to-home-video thriller. There are a few good moments, but little beyond the main actors is memorable, and they have both been far better elsewhere.
The film stars Luke Wilson as John, a seemingly normal father and husband who is visited by a stranger named Richie (Samuel L. Jackson) and taken on a wild ride. ’s ability to play an unpredictable killer is what ultimately carries this film, although is quite adept at being the shocked passenger along for the killing spree. What starts as an innocent request for help with car trouble turns into a countryside path of destruction, eventually leading back to John’s own home.
When Richie threatens John’s wife (Leslie Bibb), he must change his meek ways in order to save his family from the psychopath. Meanwhile he is a suspect himself in the stream of crimes and murders Richie has dragged him through. The plot is somewhat derivative, the resolution predictable and the actual film work are simply mediocre, but this film will still get seen for ’s performance alone. There are no special features to be spoken of.