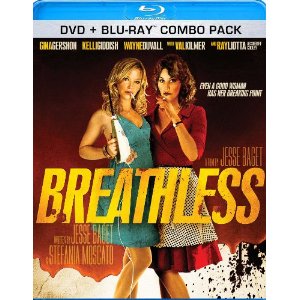 Breathless is a bloody dark comedy about body disposal, but underneath the surface it is a female dominated film noir with a wicked sense of humor. Every gory moment of the film is not magic, but there are enough of them to keep the plot moving along through dull moments. Bodies only begin to pile up and the mess gets bigger, building to an unexpected resolution.
The film takes place almost entirely inside of a remote trailer in , where housewife Loma (Gina Gershon) ties up her small-time thief husband, Dale (Val Kilmer). Dale has just robbed a local savings and loans bank, taking away $100,000 in cash, which he hid from his wife. Loma invites her best friend, Tiny (Kelli Giddish), over for advice before accidentally shooting Dale in the head. Immediately afterwards, the local sheriff (Ray Liotta) comes by to investigate the robbery. He refuses to leave until the warrant to search the trailer arrives, so Loma and Tiny are trapped inside with limited time to dispose of a dead body.
The plot complicates further when a private investigator (Wayne Duvall) blackmails Loma and revelations about Dale’s love life emerge. In the end, all of the chaos actually has a pattern and meaning, which may be a little too convenient. I wouldn’t call Breathless predictable, but I wasn’t surprised by any of the twists either. Perhaps at a certain point it just became difficult to care about any of the characters.
The Blu-ray release includes a high definition presentation of Val Kiler’s head exploding. There are also some special features. There is a generic making-of featurette along with an audio commentary with writer/director Jesse Baget and producer Christine Holder.