New to Blu: The Preacher’s Wife 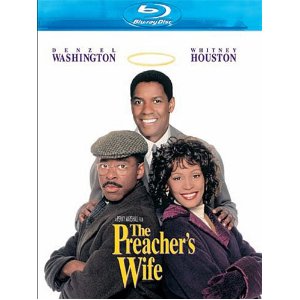 It may be a strange time to release this holiday romantic comedy on Blu-ray, but a good film in high definition is welcome at any time of the year. The Preacher’s Wife is primarily significant right now because it happens to star the recently deceased Whitney Houston, but there is also the charming co-starring performance of Denzel Washington to admire. There is no denying the vocal power of the late musical talent, especially in the film’s hit song, “I Believe in You and Me.”
The story is a remake of a classic film about an angel who gets mixed up in a troubled marriage. stars as Dudley, an angel sent to earth to help a minister (Gregory Hines) revive his marriage. When falls in love with the minister’s wife (Houston), it causes all kinds of problems. This romantic fantasy is paired with nine songs sung by .
The Blu-ray disc of The Preacher’s Wife includes only a production featurette, making the high definition presentation the primary reason for this release. It isn’t a highly visual film, but the sound is spectacular in DTS-HD.