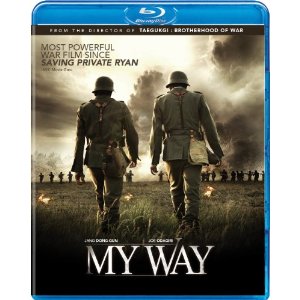 The premise for My Way was said to be the other side of D-Day, but in reality this is a film about the shifting demands of loyalty from occupied countries during World War II. It is a film about being forced to fight for something you don’t believe in and self pride, which all happens to take place leading up to the battle of . My Way is a compellingly unique war film, and one which has more than just an impressive onslaught of battle sequences. There is effective melodrama also attached so that we care for the characters involved, making this a war film not to miss.
Although this leads up to being a film about war, it begins as simply a movie about two runners from different backgrounds who are eventually forced together in battle. Jun-shik (Jang Dong-gun) is a poor Korean man living under the occupation of the Japanese. Having grown up belittled by Japanese fellow long distance runner Tatsuo (Joe Odagiri), Jun-shik must also fight for the right to simply compete as a runner. The Japanese look down on the Koreans, and when World War II begins they use them as expendable soldiers.
Jun-shik is forced into combat with other Korean men, under the regime of the hateful Tatsuo. But when they are taken prisoner by the Soviet army, both men find themselves on equal ground for the first time. The final section of this epic film then finds the men wearing German uniforms on the , though by this point the film is much more about their friendship than which side they are fighting for.
The Blu-ray bonus features include a behind-the-scenes making-of featurette as well as interviews with director Kang Je-Kyu and actor Jang Dong-gun. There is also a trailer gallery, but the highlight of the disc is the high definition presentation of the battle-filled film.