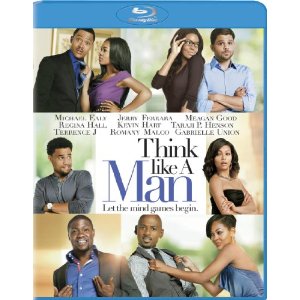 Think Like a Man is essentially a less annoying and more humorous version of He’s Just Not That Into You, and the title is infinitely better as well. The simplicity of a man’s mind truly should not need a book to clue women in, just as you would think it common sense to realize if a man isn’t calling you then he must not be that into you. But the entire selling point of the book this film is based on and the movie version is clueing women in on those simple thoughts. Where Think Like a Man improves this line of thinking is by giving women ammunition to fight back, making this a perfect battle between sexes with the parameters of your predictable romantic comedy.
Based on Steve Harvey’s best-selling book, Think Like a Man shows the battle between women and the basic male archetypes that are covered in the book. There is the non-committer, the mama’s boy, the player and the dreamer. Each of these men (played by Michael Ealy, Jerry Ferrara, Terrence J. and Romany Malco) are a problem in some way to the women who love them (played by Gabrielle Union, Meagan Good, Regina Hall and Taraji P. Henson), until they discover Steve Harvey’s book. Suddenly the women are equipped with the tools to stifle the instincts of the particular men they are dating.
At its heart, Think Like a Man is a romantic comedy. There are four storylines and a lot more comedy than I expected, but each of them follow the traditional boy-meets-girl story arc that is so predictably exclusive to romantic comedies. We know how every storyline will conclude from the first time they meet, but we enjoy the predictable much more in this particular film because of the clever script and humorous cast members.
The Blu-ray release includes several exclusive special features. There are several featurettes on the battle between men and women, including one on ‘guy code.’ There is also a behind-the-scenes featurette. The additional special feature include a gag reel and a few deleted scenes.