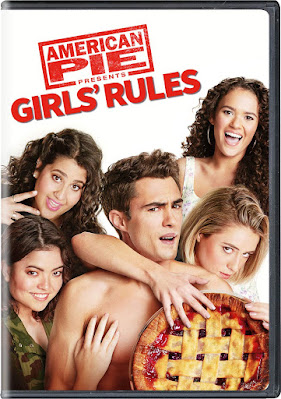 Along with a ‘Time’s Up’ driven narrative, Girls Rules makes a clear effort to appease other groups with a racially (though not exactly ethnically) diverse cast, body positivity, and an interracial couple. The main protagonist among the group of diverse friends is Annie (Madison Pettis), a high school senior desperate to lose her virginity as her boyfriend goes away for college. This goes horribly wrong, of course, so her three friends encourage her to make a pact to go after what she wants. To make things fair, each of them agree to go after their own desires as well, which they call their “girls’ rules” for some inexplicable reason, especially given there are no rules.

As Annie sets out to have sex with the man she loves, her efforts are complicated by the arrival of a new boy at school, Grant (Darren Barnet). Despite knowing nothing about him, Annie’s three friends immediately begin to fight over Grant, even though it is clear Annie is the one he has a real connection with. It is an age-old trope of friends fighting over the same romantic partner, with the most original aspect of the narrative being the amount that the male characters have been minimized. Let’s not forget that despite the original series having male protagonists, the female characters were also well developed and given motivations and desires of their own. Somehow in shifting the attention to the female characters, Girls’ Rules also eliminates any depth or layers in the male characters.

The “rules” cause each of Annie’s friends to admit what it is that they desire, which is mostly just sex. Stephanie Stifler (Lizze Broadway) is a female descendant of the foulest character from the original series, and she does her best at equal opportunity objectification, even going so far as to knock a guy out because she is attracted to him from across the lacrosse field. Meanwhile Kayla (Piper Curda) is desperate to win back the boyfriend she scared away with mistrust and jealousy, and decides Darren is the best way to do this, and Michelle (Natasha Behnam) becomes enamored with him despite having a clear connection with a nerdier kid at school.

The whole endeavor is predictable from the very first scenes, and there is little to enjoy. With a narrative as politically correct as this one, there is not much room for raunchy humor. And what little sexploitation there is in the narrative has been highly sanitized. If this is what the world of sex comedies have come to, we may be better off letting this sub-genre die out. The DVD release comes with no special features. It will also be streaming on Netflix starting today.