New to Blu: Down By Law 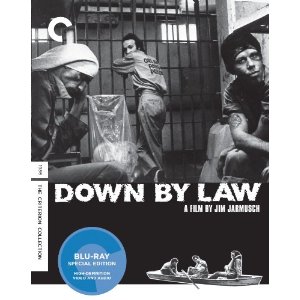 By Jim Jarmusch’s third film, Down by Law, he had clearly established a penchant for loner figures. His previous film, Strangers in (1984), and his debut feature, Permanent Vacation (1980), established this along with the New Yorker’s unique style and approach to independent filmmaking. After shooting two films in , Down by Law moves the filming to the rich landscape of , with the added ambiance of Robby Müller’s black and white cinematography. Like many of his other films, Down by By Law is a character piece which relies upon the unique personalities chosen while casting. The actors make the film what it is, though it always remains primarily and clearly a Jarmusch film.
The actor choices in Down by Law may be among Jarmusch’s best. Favoring placing non-actors in his films and casting them to play a variation of themselves is what makes Jarmusch’s direction so unique, and Down by Law is a prime example. The three-way buddy comedy follows the misadventures of a trio of loners in who end up sharing a prison cell together, and ultimately a prison escape. John Lurie is the first we are introduced to, playing a cool-tempered pimp with a dangerous opportunity that lands him in prison. Whether he is simply unlucky or framed by an unknown villain is unclear, though it matters little in the larger scheme. Musician Tom Waits is the next to arrive on scene as Zack, a radio disc jockey with women troubles. After an argument with his girlfriend, Zack finds himself drunk and given an opportunity of his own. There is also a coincidental unluckiness to the way Zack is arrested, one which also hints at the possibility of a frame-up.
The third in the cell is perhaps the most important character, though we see less of his journey leading up to the prison cell. Only after Zack and Jack have shared a cell long enough to have a healthy animosity for each other does Roberto Benigni arrive to bind them together. Benigni is now best known for his Italian comedies, particularly Life is Beautiful. When Jarmusch cast Benigni, however, he was little known out of . The amount of English he spoke was integrated into the storyline, as the hapless Italian gambler uses a notepad to fill in the silence with cliché American phrases he has learned. Roberto, as his character is also known, has an accidental arrival into prison when he kills a man in self defense after cheating at a card game. These three couldn’t be much different from each other, and the film almost seems to be a social experiment in the way we watch their interactions with each other within a prison cell and on the run.
The Blu-ray release includes a new, restored digital transfer, supervised by Jarmusch. The special features include an audio interview with Jarmusch and a video interview with Müller, both from 2002. There is also footage from the 1986 Cannes Film Festival, where this film was screened. This is just the beginning, with additional interviews, recorded phone conversations, production pictures and more. There are even sixteen outtakes, a rarity from a film before the commonplace inclusion of deleted scenes on DVDs. The insert booklet also has an essay by critic Luc Sante on the film.