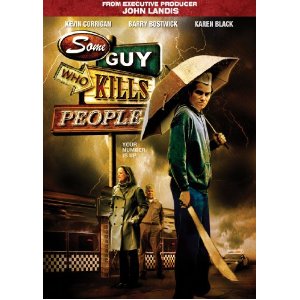 This is much less of a horror film than it is a comedy which wants you to believe it may be horror long enough to distract from a predictable ending. It has many movies swimming around in the storyline, but it is the horror which adds an element of mystery and surprise to the otherwise unrelated storylines of a socially awkward man coming out of his shell. Beyond the manipulative structure and misleading cover art, Some Guy Who Kills People is actually an entertaining little comedy thriller.
Ken Boyd (Kevin Corrigan) had a tough childhood. Although he wanted to play basketball and was actually quite good, he was ridiculed and bullied by the popular guys on the team. After he creates a comic book about the basketball players, the bullying becomes so intense that Ken eventually needs to go to a mental hospital for recovery. Years later the same bullies are still making Ken’s life hell, and his meager job at an ice cream parlor doesn’t help matters much. Life starts to look up for Ken when he is reunited with his daughter and begins to date a friendly customer (Karen Black), but this happens as all of the basketball bullies from ken’s past are killed off, one by one.
There isn’t much violence or gore in this film, though these expected elements of horror are replaced with a level of humor which is greater than is expected. The highlight of the film’s humor comes from the seemingly bumbling Sheriff (Barry Bostwick), who also happens to be dating Ken’s mother. His investigation seems to be going nowhere and he has no problem discussing this with Ken and anyone else nearby, which allows for the murders to continue.
The DVD release includes commentary track with the director, as well as the writer and producer. There is also a short film which was the inspiration for the feature film and a generic making-of feature.