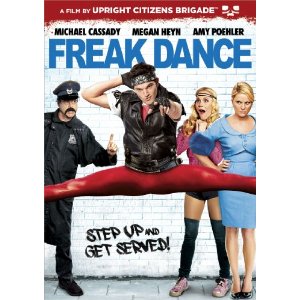 There is definitely the recognizable irreverent humor of the Upright Citizens Brigade within the comedy Freak Dance, but I was disappointed by how unimaginative much of the spoof humor was. Spoof films are the lowest level of intelligence and humor, lazily poking fun at other films with as much originality as a hipster on Facebook. The Step Up movies are put in the center of the target, along with a musical soundtrack fitting High School Musical or “Glee,” which is where the plot and most of the jokes end up hitting. This makes for an extremely predictable and mildly amusing film from a comedy troupe known for better.
The storyline is pretty much exactly what you would expect to see in any variety of dancing movies. It begins with a rich white girl who decides that ballet dance isn’t good enough for her, slumming in the ghetto so that she can learn to dance with her butt instead. Cocolonia (Megan Heun) quickly pairs up with a dance crew led by Funky Bunch (Michael Cassady), and they must take on the competition in a dance off or risk losing their rehearsal/living space.
In order to win, this group must be dirtier with their dancing than their competition. Despite the rigid upbringing of her mother (Amy Poehler), Cocolonia must learn to dance freaky in order to help her new friends. Vulgar and exaggerated dance routines follow in obvious humor, but with very few sincere laughs. Freak Dance is mostly weirder than it is funny and more obvious than it is creative.
The DVD release has an audio commentary with director Neil Mahoney, as well as a silly featurette and some deleted/extended scenes.