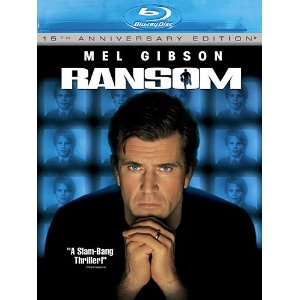 Even though Mel Gibson’s latest film, Get the Gringo, is a return to the action comedy days of his past, it has made few waves in the entertainment world. Gibson’s fans seem to have vanished, forgotten him after the last decade of hijinks and bad press, not to mention some bizarre career choices. For those who long for the golden days of Mel Gibson filmmaking can at least find solace in the Blu-ray release of the 15th Anniversary Edition of Ransom.
Along with Kurosawa’s High and Low, Ransom is one of the greatest kidnapping movies, filled with drama, suspense and action alike. Gibson stars as Tom Mullen, a wealthy executive who loses everything when his son is kidnapped. Despite all of the advice Mullen gets from his wife (Rene Russon) and the expert in kidnapping cases (Delroy Lindo), he takes matters into his own hands in an attempt to get his son back. This makes matters even more dangerous for the kidnappers and increases the suspense in this thriller tenfold.
The Blu-ray release of Ransom includes extensive deleted scenes, as well as a commentary track with director Ron Howard and a behind-the-scenes featurette. There is also a small featurette in which the cast and crew talk about how they would react to a situation similar to what the film portrays. These features have all been released before, though this is the first time that this suspense classic has been in high definition picture and sound.