New to Blu-ray: The Horse Whisperer 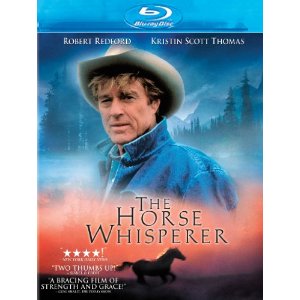 The Horse Whisperer is a difficult film to catalogue, because it has a storyline which is like few films. Though there is a horse, it is not a race movie. People wear cowboy hats, but it isn’t a western. There is some drama, some romance and a degree of melodrama. Based on the novel by Nicholas Evans, The Horse Whisperer is a hard film to define but this just seems to help make it more unexpectedly captivating.
Directed by and starring Robert Redford, The Horse Whisperer tells the story of a string of occurrences which follow a nearly devastating accident. When a young girl (played by a prepubescent Scarlett Johansson) has a devastating riding accident, both she and her horse are injured. The horse no longer seems to be the same, so a rugged rancher known as the “Horse Whisperer” () is called upon to help fix the situation.
The Horse Whisperer is a quiet and slow paced drama, running at nearly three hours long with very little action. What the film does have is lush scenery and cinematography, all of which comes off beautifully in high definition. The Blu-ray disc also includes three featurettes and a music video, taken from the DVD release so many years ago.