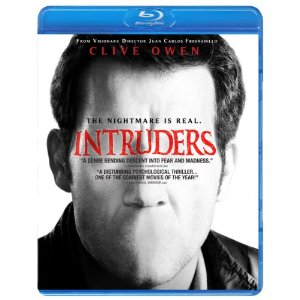 Intruders has a clever concept which is somewhat destroyed when the screenplay tries to provide too many twists and turns. There are too many questions left unanswered, which is what happens when you approach a fantastic idea with realism but don’t bother to have logical resolutions. Unable to decide whether this is a supernatural thriller or a psychological thriller, and unwilling to give up the final twist despite the gaps it provides in the story, Intruders ends up being an uneven and occasionally dull thriller instead of a simple and effective horror film.
The story follows two different children on opposite sides of the world, each experiences similar nightly attack from a man they know as Hollow Face. There is a made up back-story to explain what he wants and why he has no face, but ultimately this is just a story that a little girl made up as a school project. When the 13-year-old girl, Mia (Ella Purnell), becomes convinced that Hollow Face is coming to get her, only her father John Farrow (Clive Owen) believes she is telling the truth. It becomes a story about truth when all evidence points towards no evidence, despite the fact that John has nightly fistfights with the faceless intruder.
The predictable storyline of disbelief is the most exasperating aspect of this film, as it is any supernatural or psychological thriller. Since we are able to see the attacks, we know that there must be a monster, but everyone else doubts the sanity of the father and daughter. Each time he visits, the hollow-faced monster tries to take something from Mia’s face. After the first successful attack she is left without the ability to speak, and future attacks threaten the rest of her facial abilities.
The Blu-ray release includes a making-of featurette, as well as some behind-the-scenes footage. There are a few sequences where the high definition enhances the thrills and the effects of this film, though it makes little difference for the remainder.