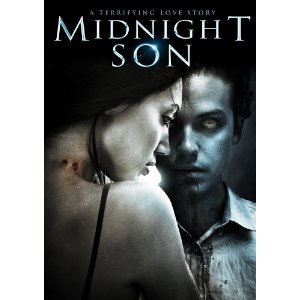 The last thing cinema needs is another vampire film. At a certain point there is nothing new to add to the genre, and that is exactly the territory that Midnight Son falls into. The approach is like dozens of other films, from start to finish unimpressive and easily forgettable. This is not to say that there aren’t aspects of Midnight Son which are well executed, but each moment has been done better elsewhere.
The one saving grace of Midnight Son is the fact that we are spared the sequences which explain how our protagonist became a vampire. Jacob (Zak Kilberg) is a night security guard with a hatred of the sun and an insatiable hunger. Eventually he discovers that the only thing to relieve the hunger inside of him is blood. At first buying animal blood from the butcher seems to be enough, but soon after he is bribing hospital employees for human blood instead. Like the slippery slope of urge satisfying, this inevitably turns into a consumption of fresh human blood.
At the same time that Jacob grows accustomed to his newfound insatiability, he also begins a romance with a young drug addict he meets on the street one night named Mary (Maya Parish). Their relationship runs parallel to Jacob’s discovery of the monster within. While Mary is a temptation for Jacob, his abilities provide specific benefits as well.
The special feature on the Midnight Son DVD includes an audio commentary with writer/director Scott Leberecht and stars Kilberg and Parish, as well as Jo D. Jonz. There are also deleted scenes and interviews with the cast and crew members.