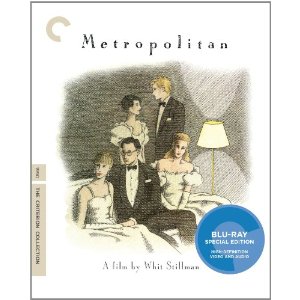 Whit Stillman’s Metropolitan somehow seems both ahead of its time and stuck in the ways of the past. The class issues engaged seem irrelevant in some ways today, and in others they are just as important as ever, if not much more hidden than once before. Interestingly enough, made in 1990 Metropolitan was even more scathing an unexpected, an upper crust criticism in the aftermath of Reagan’s reign of the 1980s. Garnering a nominated for Best Original Screenplay, Metropolitan is a dialogue heavy film about the romantic misadventures which occur when an outsider enters a group of elite preppies during the debutante season.
We enter the world of the wealthy upper crust through the accidental inclusion of occupant Tom Townsend (Edward Clements). Though he wears a raincoat instead of an overcoat, the group of socialites invite him along out of happenstance; they are short a number of male escorts and Tom’s inclusion will balance the numbers. This provides Tom, and the audience, with a front row view to the pretentious debates and immature games played with utmost seriousness which takes up a majority of the time spent at the parties.
Though these are rich socialites, Metropolitan paints a very different picture than “Gossip Girl.” While these adolescents also spend their time drinking and acting as though they are adults in the apartments their parents own, they do so with an element of deadly seriousness. There is a faux maturity and seriousness which is placed upon everything and one can’t help but wonder why they feel so rushed to imitate their parents. At the same time, their treatment of romantic issues within the group quickly places them back within their age group. Tom becomes entangled, both because of a girl within the group he once dated and still remains interested in, and a different girl who becomes obsessed with Tom.
Roger Ebert called Metropolitan, “a film Scott Fitzgerald might have been comfortable with.” This is a perfect description for a film about a group of adolescents putting on a show in order to disguise their individual insecurities. This is a film about thoughts and feelings coming from a group like this, and it is potent with dialogue and believably flawed and complex characters. Not much must occur within the story for the film to remain engaging.
The Blu-ray release of Metropolitan includes a restored high-definition digital transfer, supervised by Stillman and cinematographer John Thomas. There is an optional audio commentary by Stillman, joined by Editor Christopher Tellefsen, and actors Christopher Eigeman and Taylor Nichols. There are also some rare outtakes and alternate casting ideas, also with commentary by Stillman. The insert booklet has an essay by critic Luc Sante.