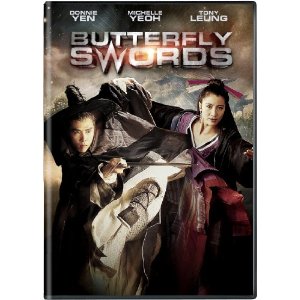 Although Butterfly Swords stars some of the biggest names in Asian action films today, it was made before they were at the height that they are now. This is the type of martial arts action film which is what inspired Ang Lee’s Crouching Tiger, Hidden Dragon, though with an R-rated sensibility where humor and violence is concerned. They still fly through the air gracefully, but also have the strength to kick a man’s head completely off of his body. There is the style and elegance, as well as a fantasy of extreme strength and destruction. Butterfly Swords was made in 1993, and carries a very distinct style from the times.
The story is somewhat confusing between the action sequences, filled with deception and betrayal, along with a strange love triangle between childhood friends. There are evil rulers in the Ming Dynasty, and it is up to these childhood fighters to stand on the right side. The problem becomes discovering which of the two rulers in the land the evil ones are.
Starring Donnie Yen, Michelle Yeoh and Tony Leung, this film is star packed and full of martial arts talent. Butterfly Swords is fast paced and violent, to the point where men can be drilled all the way to their crushed skull into the ground with the right kick. It is almost cartoonish at some points, with all of the exaggerated sound-effects that once was paired with kung fu films.
The DVD release of this lost film from the early 1990s comes with no special features and in mediocre quality picture and sound. If it weren’t for the stars attached and the fame they have gathered since, this film may never have been released at all.