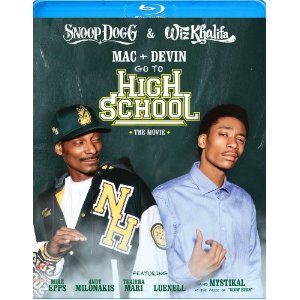 Mac & Devin Go to High School is a marijuana comedy, which suggests a double-entendre within the title. With rap stars Snoop Dogg and Wiz Khalifa starring, not to mention a cartoon joint voiced by Mystikal, it is also a film about hip-hop culture. The attitude and views found within this culture can be discovered by listening to any of the socially irresponsible and morally devoid songs played continuously on whatever popular radio station is in your area. The message here seems to be correlating with the single from these two stars, essentially saying that being young means getting drunk and high. I have no problem with this immature viewpoint coming from actors/musicians who are far from high school age, but the fact that it also brings a message which is sexist and downright abusive towards women is much easier to swallow.
Snoop Dogg plays Mac Johnson, a 15-year senior who essentially stays in high school to sleep with the young girls and sell weed to his classmates. He changes his mind and decides to graduate only once he gets a teacher who is attractive in her inappropriately short skirts and unwilling to date a high school student. Devin Overstreet (Khalifa in his first attempt at acting) is a different type of student, so responsible that he doesn’t sleep with his girlfriend or smoke weed. When these two unlikely students are paired up for a chemistry experiment, they each have something they can learn from each other.
What they teach each other is somewhat one-sided. Although Mac eventually learns just enough to get out of high school, it is Devin who learns the most when Mac teaches him how to smoke weed and get laid. In order to have sex he must tell off his bitchy girlfriend and visit a prostitute, but this is all much easier for the uptight student once he has learned to smoke copious amounts of drugs first. In this world, it seems as though everyone but Devin is already smoking weed anyway. Even his teachers look to Mac for supply.
The Blu-ray includes an audio commentary by director Dylan Brown, as well as Snoop Dogg and Wiz Khalifa.