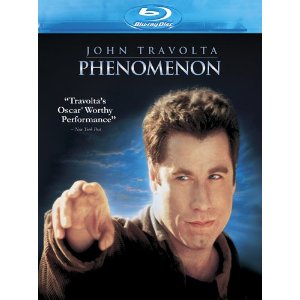 Phenomenon is an interesting adult fantasy which bleeds into adult melodrama romance, but it happens in a way that is effective. Instead of scoffing at the manipulation, it is easy to get swept up in the emotional landscapes of Phenomenon. This partly due to a talented cast, headed up by John Travolta, Kyra Sedgwick, Robert Duvall and Forest Whitaker. Special circumstances come to a small town in the film’s storyline, and what makes the film stay about the characters rather than the fantasy element is the willingness for the storyline to stay small.
George Malley (Travolta) is an ordinary guy, a small town mechanic without much education or experience outside of his limited world. On his 37th birthday, all of this changes. When he is knocked out from a blinding light, George wakes up with new abilities. He finds himself growing increasingly intelligent, eventually capable of mental abilities thought impossible. When George can move objects with his mind, the doctors are all baffled.
Although it seems that the storyline could easily progress towards a larger lifestyle, George is content to stay in his small town because of the people there. Most importantly is a furniture-making single mother (Sedgwick) George begins to date. This is the relationship which stays at the forefront of the storyline, despite all of the fantasy elements, and it is also what makes this a guaranteed two-hanky film.
The Blu-ray release doesn’t include any special features, but it does have the film in high definition picture and sound for the first time. There are not too many special effects to be improved, but basic image is much sharper and cleaner looking.