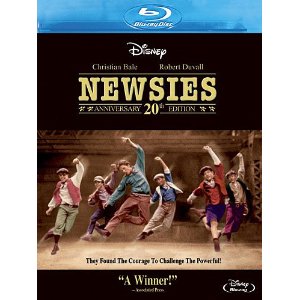 Before Christian Bale was Batman, he was dancing and singing in a Disney movie like Zac Ephron. Newsies was the musical for a younger generation; a generation during which the musical was dead. This was an impressive return to classic filmmaking by Disney, and 20 years later it still stands up as solid entertainment. The classic dance routines were even choreographed by the same man who would create the dance routines for the future generation’s High School Musical.
Newsies is a period musical which tells the tale of a group of newsboys who must use song, dance and courage to stand up to the corruption in their city. They don’t just deliver the news, but they are also forced to stand up for themselves. It’s kind of like the male storyline for Annie, minus the orphanage. These are a group of street-wise kids who sell newspapers while they sing and dance.
As well as a younger Christian Bale (who had already been in the business for years), Newsies stars Robert Duvall and Ann-Margret and a group of other recognizable faces. The Blu-ray includes an audio commentary with the filmmakers as well as a slew of previously released behind-the-scenes featurettes. There is also a storyboard comparison and a great sing-along feature, not to mention the high definition picture and sound.