New to Blu-ray: The Color of Money 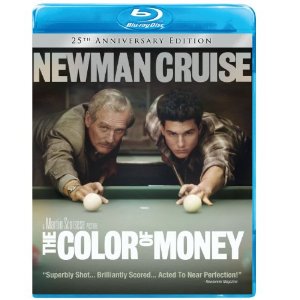 Martin Scorsese is not known for doing sequels, especially not of films that aren’t even his own, but twenty-five years ago he made a fantastic follow-up film to The Hustler. The classic pool hall hustler film starred a young Paul Newman as a fiery gambler with a penchant for trouble. The Color of Money also has an impatient albeit talented protagonist, though it is no longer Newman. Tom Cruise fills that role, making this a star-studded classic, and one which stands on its own.
Newman returns to his Academy Award-winning role as Fast Eddie Felson, who know has wisdom to go with his talent. Felson picks up a rookie pool shark named Vince (Cruise) and begins showing him the ropes. They make plans together, though Vince inevitably makes the same egotistical mistakes that Felson once made. From the way the billiard sequences are shot to the acting by the film’s two stars and the direction by Scorsese, The Color of Money is a near perfect film.
Now this 25-year-old classic can be found on high definition Blu-ray. There are no real special features, but the high definition picture and sound is reason enough for an upgrade of this modern classic.