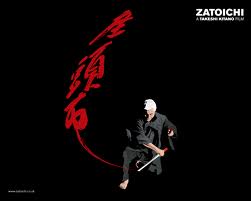 Takeshi Kitano is an artist. I don’t simply mean this because he is a simple and subtle actor, able to convey meaning and humor through minimal movement and dialogue. I also don’t call Kitano an artist because of his unique and creative style as a filmmaker, or his passion for poetry and Japanese game shows. The reason I refer to Kitano as an artist isn’t because of one of these things, but rather, because of all of them. If he were only an actor I would still refer to him as an excellent actor, but it is his passion for continually challenging himself in new forms of artistic creation which makes Kitano such a mesmerizing artist to follow. His unpredictable nature seems to come with the joy of discovery, the artist obviously enjoying the process as much as the outcome.

The Blind Swordsman: Zatoichi is a perfect example of this unique need to be inventively original. Zatoichi is an iconic name in Japanese pop-culture history, like Robin Hood to . Previously played by Shintaro Katsu in 26 Zatoichi films, Kitano adapts the popular blind fighter to his own unique vision. The plot is traditional in the basic description, but the presentation is nothing like the film series from Japanese film history. The action sequences don’t display the abilities of the actors like the past, but instead are done with lightening speed and CGI effects to detach the violence from realism (much like Quentin Tarantino’s method in Kill Bill Vol. 1). 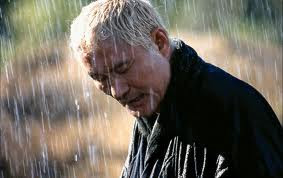 Upon its release there were some complaints by film fans about the realism of the deaths in the film. The blood is all created on the computer, as are many sword blades during the fights. When the sword enters the flesh, blood spurts out with creatively stylized splatters. Even the high definition presentation cannot hide the traces of obvious digital effects, but this effect has its benefits. The film’s action sequences are fast and over quickly, but they remind the audience that it is simply a film, heavily stylized. This makes the unusual musical choreography of the film editing much easier to understand. Throughout the revenge plot in a small 19th century village there is a building being constructed, and the percussion soundtrack follows in the pattern of their progression. This all builds to a final dance number which is spectacularly inaccurate to plot and period.

The high definition on the Blu-ray may not improve the rustic special effects in the otherwise violent battles, but the audio on the Japanese track actually sounds much better than I expected. The back of the Blu-ray says that the audio for the English dubbing is 5.1 DTS-HD, and yet the Japanese track with subtitles sounded much better to me, even though it is listed as only Dolby Digital. The special features include a behind-the-scenes featurette and interview footage with the crew.